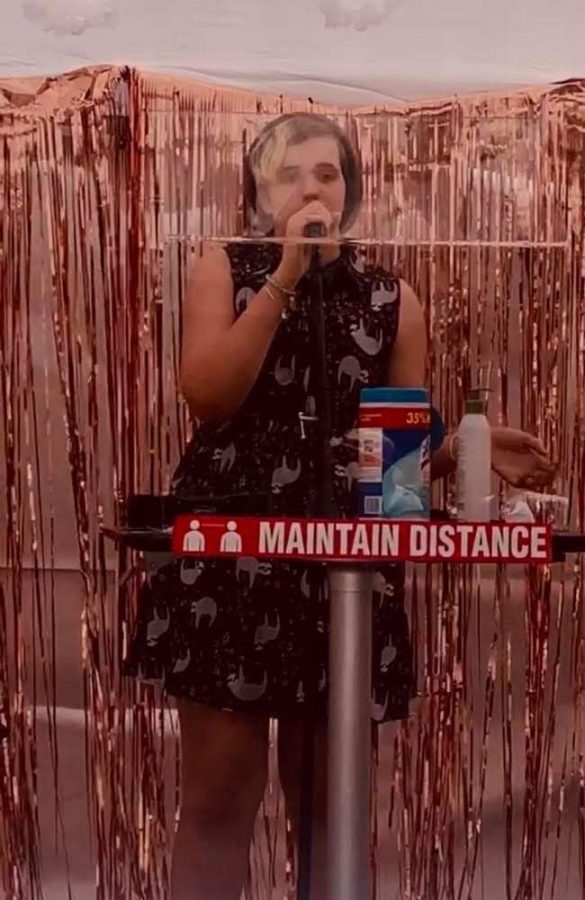 Ellery Bodell ’22 writes and produces their own music, as well as performs in front of live audiences, even amidst the Covid-19 pandemic.

As a community that prides itself in the musical arts, it’s no surprise that there are young, talented musicians in Westport looking to make their dreams a reality. Many aspiring artists pursuing their musical careers start after high school. Yet, for a certain young artist, their journey has already begun.

Ellery Bodell ’22 (pronouns they/them) comes from a long line of musicians. They are the grandchild of singer Eartha Kitt who was the original singer of the hit song, “Santa Baby.”

Bodell has published several songs on Spotify, including “Smoke Signals” and “No Rest for the Wicked.” However, Bodell only just recently started actively writing and producing their own songs.

“I was sort of tentative about it before and I didn’t know if it was going to be for me,” Bodell said. “Just recently, I started really songwriting and putting work into it. And so here we are now.”

Bodell’s strong support system is, in part, what fuels their drive to continue songwriting. Their parents, especially, have always been great supporters of Bodell’s career.

“Even when it comes to performing in town, they’re a huge support for me. And I’m so grateful for that,” Bodell said.

In producing their songs, Bodell collaborates with producer Larry Edoff and carries on with vocal lessons with singer and actress and founder of the Triple Threat Academy, Cynthia Gibb.

“I’m so proud of their courage to produce original music,” Gibb said, “and to actually go out to create it, to develop it with professionals and then to put it out there in the world.”

Gibb, who has been a teacher of Bodell for over five years, has been able to witness their songwriting career become a reality.

“As an artist, I just see them developing more and more levels of their creativity and they sing [now] in multiple genres,” Gibb said.

Along with creativity, Bodell uses their songwriting as a means of articulating their thoughts and emotions that aren’t able to be conveyed just by talking.

“For me, it’s the expression. Songwriting for me is a way to get everything that’s in my head  out,” Bodell said.

Bodell’s songs carry different meanings as well. Though many of their songs are more of a personal outlet for expression, other songs they have written convey meaningful messages to their audience.

In the first song they had written, Bodell sang about the importance of using your voice and making it heard, when others may try to silence it.

“If you have a voice, you should use it. And if people are putting you down, then you should fight against [them],” Bodell said.

Their messages have certainly been recognized by listeners of their music, including close friends who have been able to see Bodell’s inspiring, creative character translated into their songwriting.

“I remember the song that they showed me and I remember just being blown away,” Alexa Scully ’22, a good friend and supporter of Bodell said. “I could imagine them creating something like that because it was so unique and different”

“They’re a very passionate person,” Ava Porretta ’22, who has actively listened to Bodell’s songs and has conversed with them on the topic, said. “They care a lot about their craft and so I definitely think that they put a lot of emotion into their songwriting and what they write about.”

Bodell’s music shares meaningful messages that they hope reaches listeners in an impactful, endearing way. They hope to provide the feeling of comfort and security, something many often are in short of.

“I know that other people are like me,” Bodell said, “and I just want them to feel like, [when] listening to my music, they can let their hair down and just be themselves.”