‘To All the Boys: Always and Forever’ presents disappointing ending to highly acclaimed trilogy 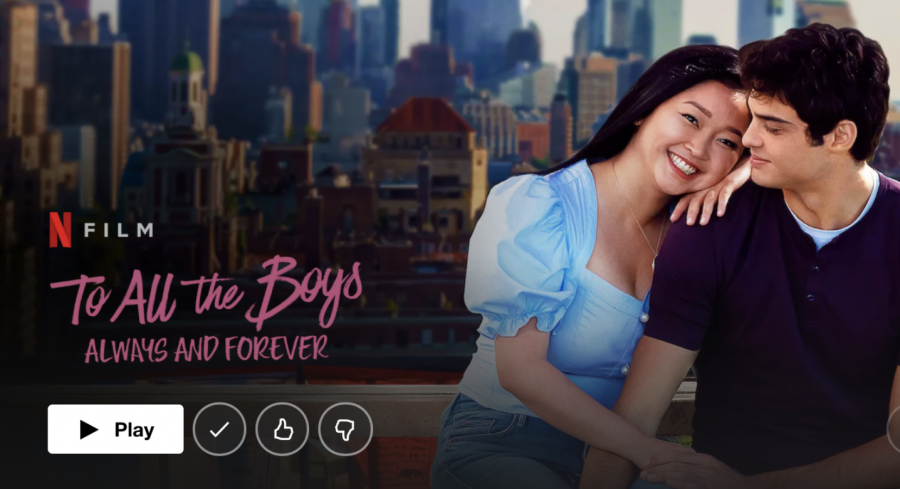 New release and the third in its trilogy, “To All the Boys: Always and Forever,” came out on Netflix on Feb. 12 and stars Lana Condor and Noah Centineo.

Many teenagers were excited to find out that there would be a third movie added to the “To All the Boys” series on Feb. 12 and social media quickly became flooded with countdowns to the release. The movie stars Lana Condor, Noah Centineo, Anna Cathcart, Janel Parrish and many others who were featured in the first two movies of this trilogy.

The first movie, “To All the Boys I’ve Loved Before” follows a shy high-schooler named Lara Jean Covey, who writes letters to boys she has a crush on. Her younger sister Kitty (Katherine) sends them out for her, without Lara Jeans’ approval, throwing Lara Jean’s life for a loop. The movie follows the developing relationship between Lara Jean Covey and Peter Kavinsky, one of the five love letter recipients. Fans absolutely adored the romance, comedy and drama that this movie offers and couldn’t wait for the highly anticipated second and third movies to be released.

The second movie of this trilogy, “To All the Boys: P.S I Still Love You” hit Netflix in February 2020 and received mixed reviews. It follows the relationship of Peter and Lara Jean and the trouble they face when their love story is interrupted by the presence of a new character, John Ambrose.  This installment of the trilogy fell short for many fans. I felt that the plot was underdeveloped, rushed and my favorite aspects of the first movie were no longer there. Many of the scenes even made me cringe, something that the first movie definitely did not do.

To my surprise, I felt that the third movie was actually much better than the second. After watching the trailer to the third movie a few weeks before the movie was released, I thought that I could predict everything that was going to happen, but this movie definitely still managed to throw some curveballs. It follows Lara Jean and Peter through their high school graduation and the process of college decision making, one that proves to be more difficult than anticipated.

Side character Kitty definitely carried the somewhat pleasant parts of the movie. Kitty deserved to have a more pivotal role in this movie, since the storyline between Lara Jean and Peter became boring at times and humor throughout all three movies helped keep it alive.

Aside from the general plot, the visuals were one of the best parts of the movie. There are many really nice moments in New York City and Seoul, South Korea. Some of the scenes that were executed the best were shot in cafes, ice cream shops and on the New York streets at night. All three movies also had outstanding soundtracks. The second and third movies even featured singles written and recorded by singer Ashe.

Although the plot seemed underdeveloped, the character development was shown through the movies. Lara Jean matured a whole lot and is seen making more practical and thoughtful decisions as she gets older. She also becomes more independent and relies less on those around her.

In the earlier movies, when she is unsure of something, she relies heavily on others, whether it be her older sister Margot or her friends around her including Belleview senior citizen Stormy. In the final movie, Lara Jean is forced with many challenging decisions and for the most part she realizes that she has to solve them on her own as she knows herself better than anyone.

So overall, if you were a fan of the first or second movie of this trilogy, I definitely recommend watching this movie as it is a heartwarming way to end this love story. However, if you are not a previous fan, I wouldn’t recommend starting with this movie.

Although it does have the essentials of a good rom-com such as young love, drama and conflict, it fell flat at times and made me cringe more than I anticipated. If I were to rank this trilogy, I would put the second movie in last place, followed by the third movie in second and topped off with the first movie in first place where it belongs. Overall, I would rate “To All the Boys: Always and Forever” a solid 6.5/10.