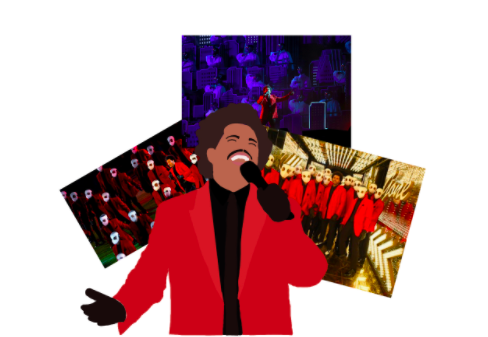 Pouring 7 million of his own money into the show, the Weeknd centered his performance around a character he had been creating during his new album release while solely emphasizing his songs and voice itself, gimmick-free.

From the first performance by Michael Jackson in 1993 to Katy Perry’s memorable singing of “Roar” on a giant lion, to Jennifer Lopez and Shakira’s latin fire, the Super Bowl halftime show has become a must-see performance. So, amidst an obtrusive pandemic, of course Americans tuned in to witness Super Bowl LV’s halftime show on Feb. 6.

This year, 30 year old R&B pop star Abel Tesfaye, better known as The Weeknd, took the stage even after frustration surrounding the Grammy’s this past year and new COVID-19 performance restrictions. Pouring $7 million of his own money into the show, the Weeknd centered his performance around a character he had been creating during his new album release while solely emphasizing his songs and voice itself, gimmick-free.

“There wasn’t any room to fit it in the narrative and the story I was telling in the performance,” The Weeknd told the NFL Network when asked about guest performers, “So there’s no special guests.”

Tesfaye opened on a stage built in the stands, a first in Super Bowl history, with a sparkling cityscape behind him consisting of neon signs and lit up buildings. He sang his catchy 2016 hit “Starboy” to start off the show while dressed in his recognizable red blazer and black gloves. “The Hills” and “I Can’t Feel My Face” followed next as he abruptly grabbed the camera himself and brought it backstage while look-alike dancers swarmed and created chaos in full-faced bandages, a look he has publicly showcased many times in the past year.

Perhaps the most impactful scene occurred when the Weeknd came out onto the field with his large group of bandage faced dancers, who notably were all people of color. He finished out the show with his recent hit “Blinding Lights,” free of the usual guest stars or extravagant stunts. Instead, it was just him left standing at the end with his look-alike dancers lying on the field as if he had defeated the alternate versions of himself.

However, following his performance, many were confused or unaware of the Weeknd’s deliberate creation of a character leading up to his new album release, “The Highlights,” that was behind the bandaged background dancers and costume choices.

Tesfaye was attempting to comment on the current negative culture surrounding celebrities.

“The significance of the entire head bandages is reflecting on the absurd culture of Hollywood celebrities and people manipulating themselves for superficial reasons to please and be validated,” he shared with Variety prior to his performance. “It’s all a progression and we watch ‘The Character’s’ storyline hit heightened levels of danger and absurdity as his tale goes on.”

Although, many felt this year’s halftime show missed the mark and failed to leave an impact on viewers.

“We’ll never know if his somewhat sleepy mini concert was due to a lack of imagination or COVID restrictions,” Vulture commented when comparing the Weeknd’s performance to past shows. “For most of his 12 minutes he just stood in the same red sparkly jacket singing in front of risers filled with musicians and backup singers.”

On the other hand, Staples students were more understanding, and fans of the Weeknd enjoyed his production and choices.

“I like his music a lot so I enjoyed it, but I understand that they had to tone down the show a bit due to COVID-19,” Abby Logan ’22 said. “I feel it could have been more extravagant if there weren’t restrictions but I did appreciate how they incorporated masks into the costumes.”

Despite differing opinions, the Weeknd’s softer performance mixed with his catchy, feel good songs was the right way to go about it during a year where many aren’t feeling so extravagant.