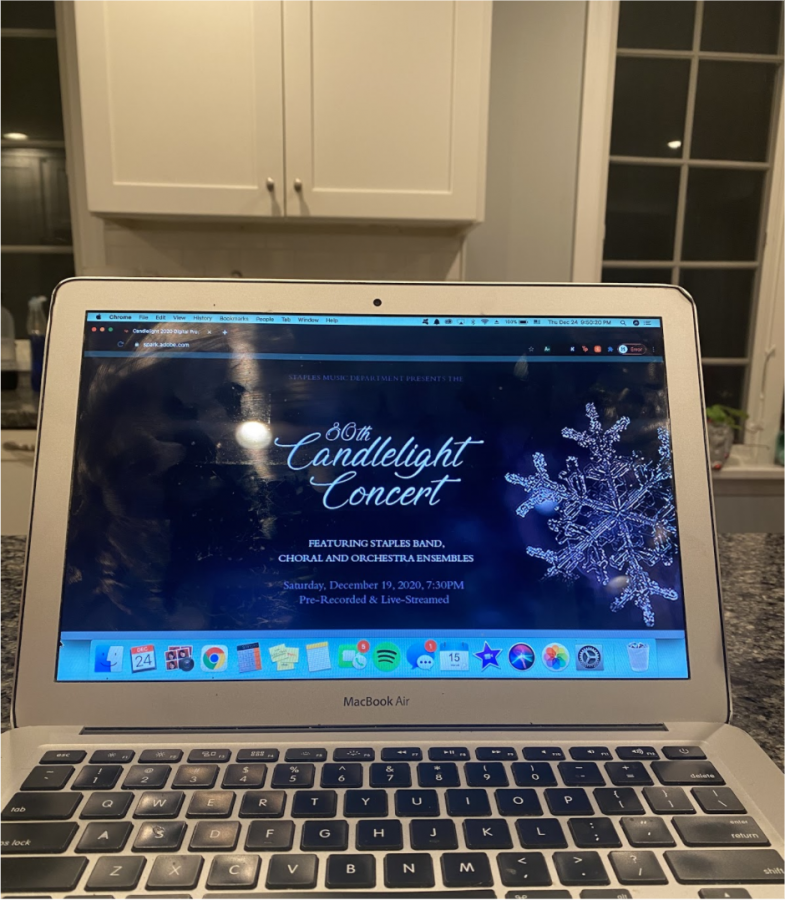 Despite the barriers put in place by COVID-19 the highly regarded Candlelight concert prevailed taking on the form of a virtually broadcasted performance accessible to thousands across the nation.

Every year the holiday season is unofficially underway when bright lights illuminate the Staples high school stage and music fills the air, commencing the annual Candlelight concert. A performance so highly valued by Westport, this year’s concert held even more importance as it was the 80th year of Candlelight.

Despite the historic anniversary, the concert looked very different from the year’s prior. As COVID-19 concerns grew, a decision was made to hold a virtual concert for thousands of viewers to enjoy from the comforts of their own couch. Free tickets were able to be reserved on the Staples music website, which granted every ticket holder access to a live streaming link.

“Though I was looking forward to another year of the classic Candlelight traditions like playing ‘Hallelujah,’” Lucy Belknap ’21 said, “getting to try something completely new and inventive was a really unique and special experience.”

In order to ensure the safety of all the performers, the concert was pre-recorded by a camera crew and each ensemble was pieced together in a livestream video to create an experience similar to a typical Candlelight. Given that this was the 80th anniversary, the virtual concert paid homage to those who contributed to the ongoing success by sprinkling countless interviews with music teachers and native Westporters between songs.

“It was really cool to be a part of such a historic performance,” Chloe Chaple ’21 said. “My sister performed during the 75th anniversary, so it was awesome to see some of the clips of her grade playing and share the memories together.”

As for the performers, a typical Candlelight weekend would include four separate performances throughout the weekend. However with only one virtual concert occurring, each ensemble was allowed to perform only one song with a limited number of takes in order to perfect their performances.

“It was a lot less stressful that I didn’t have to focus on practicing so many songs,” Simon Sandrew ’21 said.

Adam Kane ’21 was appreciative of the opportunity to have multiple takes in replacement of the typical four chances they would have during a normal Candlelight.

“I enjoyed being able to play where we had multiple takes, and had a few opportunities to get it right,” Adam Kane ’21 said. “I also felt more comfortable in the darkness and not under the hot lights.”

Despite the challenges faced, the concert prevailed and proved to be just as much of a success as those of previous years. Due to the popular demand, rebroadcasts were held on Dec. 24 at 2:00 p.m. and 7:30 p.m. EST.