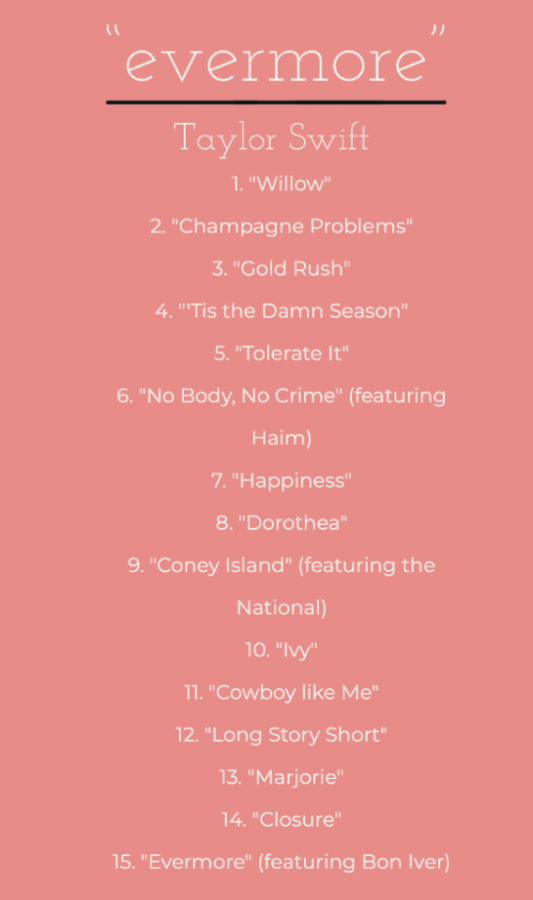 Taylor Swift dropped her surprise album “evermore” on Dec. 11, not posting about it until the morning before. It is the sister album to “folklore,” which she released in July.

Do you remember the feeling of comfort when your parents read a storybook to you?  Do you recall the dwindling sparkle of the holiday lights around a room while you watch a movie? Can you recollect the warmth of a fire in a fireplace as it illuminates the living room on Christmas Eve? The only way to describe “evermore,” Taylor Swift’s album that dropped on Dec. 11, is that same incandescent feeling of childhood..

Swift’s ninth album was written in isolation as the sister album to “folklore,” which was released in July. This album breaks from the first, as it is no longer her personal narrative of her own life. Instead, she tells a myriad of new stories disconnected from herself. Each song takes a whimsical storytelling angle. Whether it be the tale of small town murder mystery in “no body, no crime” or telling the story of her grandmother in “marjorie,” Swift breaks the memoir storytelling barriers that once defined her career.

Swift, who for years was known for writing deeply personal songs about relationships and feuds, shifted away from this format while writing “folklore.” Now with “evermore,” she took the creative, fictional narrative first explored in “folklore” and expanded it into a collection of fairy tales. Each song depicts different characters, but nonetheless an enchanting world can be found in all.

For instance, when listening to the song “willow,” I envision a couple from Europe in the 1400s who are traveling through the world on ships. While a seemingly unusual image from the artist once dubbed “Miss Americana,” the powerful ability of these songs to not only transport the listener to another world, but also give an opportunity for anyone to create their own vision of what the song is trying to convey, is what makes it such an enchanting and dynamic listening experience. While each song has their own conventional plot, the listener has the opportunity to explore their own ideas.

Through deeply complex lyrics, Swift is able to make the listener feel as though they are a kid reading through books at their local library. Instead of repetitive lyrics to create a catchy chorus, these songs focus on creating deep imagery.

In the past, one of Swift’s greatest downfalls has been how her singles deviate from the sound of the album because of commercial interests. On “Red,” despite being one of her most well-received albums, songs like “22” or “We’re Never Getting Back Together” are a stark lyric and style change from the emotionally complex standout song “All Too Well.” This disorder creates an unusual dichotomy within the discography, which undermines the story she is trying to tell. Conversely, on “evermore,” the natural cohesion of its style and the intricacy of its lyrics makes for an evocative story. Swift didn’t develop this album with the need to create a chart topping single, and that’s, in part, what makes it so good.

That being said, at times “evermore” feels as though it has taken too far of a leap in an attempt to mix different musical genres together. The sixth track, “no body, no crime,” is a valiant effort to mix pop, folk and country, but ultimately the competing styles take attention away from the already complicated muder plotline.

Every artist has their niche. Some may be known for their impressive vocals or their instrumental skills, but Swift’s ultimate skill is her ability to convey a story through her songwriting. “evermore” highlights and pushes the bounds of these skills, leading it to be one of her best albums.

Despite some stylistic downfalls, Swift’s ability to tell a clear and moving story shines through on “evermore.” In a time where people are stuck in isolation, unable to travel and have had to limit their social connections, “evermore” is an ideal album to distract yourself from the rest of the world. Never has it felt so needed to have an accessible and profound escape, and for that, I give this album 9/10 stars.