‘Big Mouth’ remains one of the funniest shows on Netflix 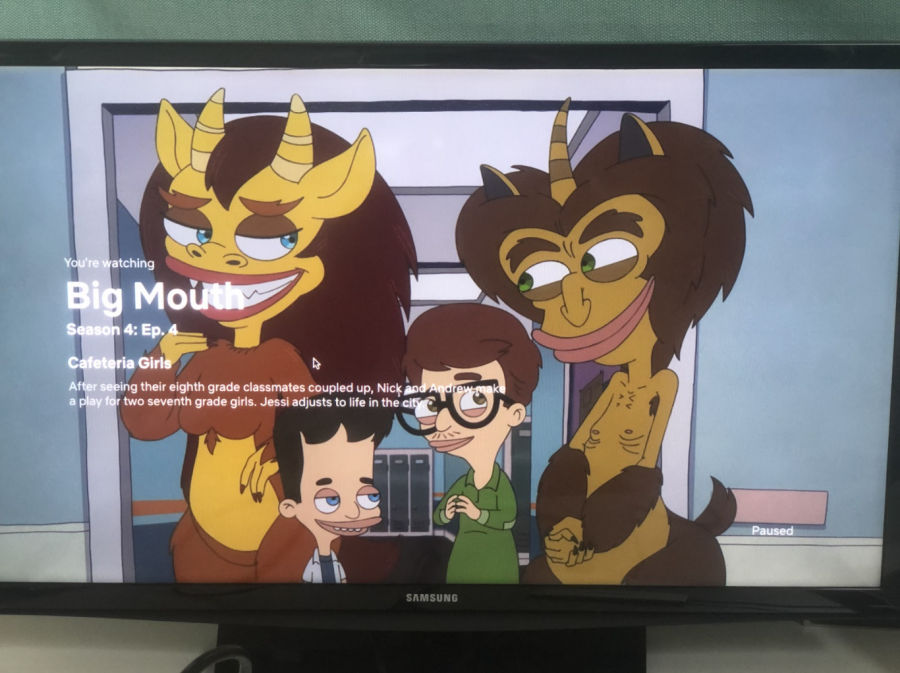 Andrew and Nick, with their “hormone monsters,” tackle the various issues that eighth grade presents.

Season four of Netflix’s “Big Mouth” dropped on Friday, and it did not disappoint. All your favorite characters return in season four including Coach Steve, Maury the hormone monster, Connie the hormone monstress and of course Jessi, Missy and Jay. There are some additional characters as well, including the addition of the great Seth Rogan’s voice as Nick’s best camp friend, Seth Goldberg.

“Big Mouth” is a cartoon show targeted towards high schoolers and older audiences. The show follows the students of Bridgeton Middle School as they enter the world of puberty. Created by comedian Nick Kroll, it is loosely based off the pubescent years of him and his childhood best friend Andrew (voiced by John Mulaney).

The 10 episode season starts off with Nick and Andrew in summer camp, still upset with each other after Nick kisses Andrew’s crush, Missy.

This season keeps it’s comedic exterior while also tackling very difficult issues that kids experience while growing up. At summer camp, one of the previously male campers comes back as a transgender girl. She has to deal with the weird ways the boys treat her, like asking what her body looks like now and the mean and condescending ways the girls act and look at her. The show does a fantastic job of teaching the audience what it is like to be a transgender person and all the horrible and stupid questions and insults they deal with everyday.

By episode three, the wild wild summer at camp ends, and the characters return to school to start the eighth grade. Back in the New York suburb, the students take a field trip to the 9/11 Memorial.

During this field trip, Coach Steve struggles with the fact that his birthday is on 9/11, Jessi gets a new shallow boyfriend and Missy, who is black, encounters racism. While these are all hard-hitting issues that are not considered funny, the show manages to walk a fine line by finding humor in serious issues.

The common motiff for the season was anxiety. As someone who experienced anxiety in middle school, I found this season to actually be the most relatable. The season focused on some things that middle schoolers focus too much on, like their social standing, their love life, and their level of attractiveness. But it also showed the very real anxieties that middle schoolers can face, like going to a new school, coming out as gay and being pressured into doing something you don’t want to do.

Season four took a huge risk addressing all these issues with jokes, but it worked out, allowing the audience to seriously learn about and consider these real and pressing issues.

If you’re looking for a laugh in these very tough times, then “Big Mouth” is for you.

I give the fourth season of “Big Mouth” a 9/10, and recommend it to anyone who enjoyed the first three seasons, which, if you haven’t seen them yet, definitely give those a whirl.