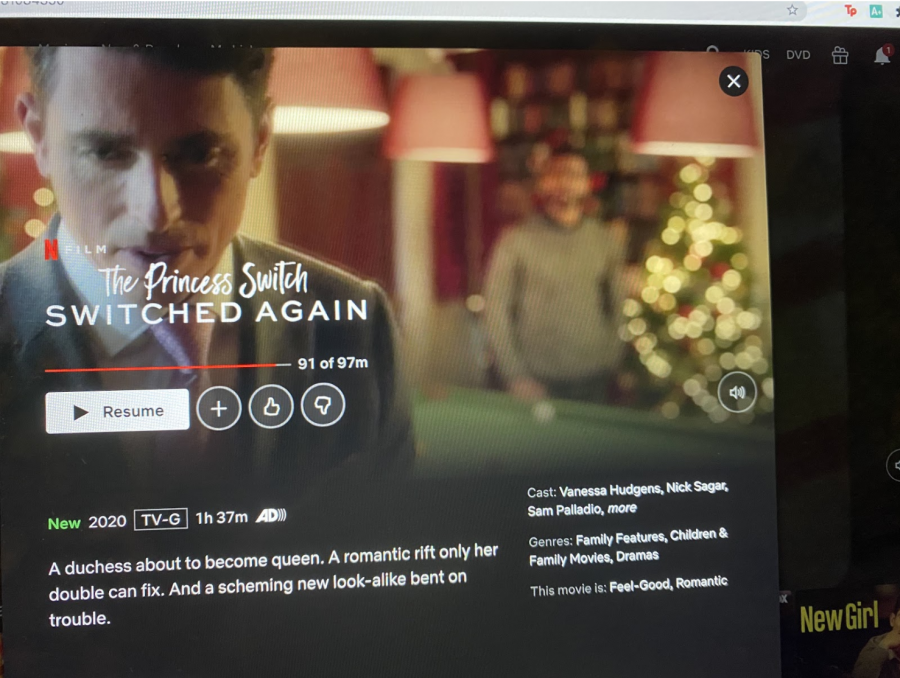 The Princess Switch, a 2018 film directed by Michael Rohl is one of my top comfort movies. The romantic comedy features Vanessa Hudgens, one of my favorite childhood actresses, and takes place in fictional Belgravia. The film tells the story of a duchess who switches places with an ordinary woman from Chicago who looks exactly like her, and after trading places, they each fall in love with the other’s future lovers. This happy and heart-warming story immediately became a favorite of mine when originally watching it two years ago.

After recently hearing The Princess Switch: Switched Again was coming out on November 19, I was excited and curious as to how the story would be continued. Just as in the first, the two main characters are both played by Vanessa Hudgens and she even gets to play a new, slightly more evil character.

Chicago baker Stacy (Hudgens) gives a brief reminder at the start of the movie that she is now a princess, as she wound up with Prince Edward (played by Sam Palladio) while visiting Belgravia for a baking contest. Her coworker Kevin (Nick Sagar) also makes an appearance at the start of the film, when we are informed that his relationship with Margaret (Hudgens) did not work out.

Stacy, Kevin and Kevin’s daughter visit Belgravia for Margaret’s coronation in an attempt to reunite Kevin and Margaret and possibly bring them back together. However, when arriving, they discover new obstacles that may keep them apart. Crazy cousins, new love interests and other complications quickly create problems for both couples.

Stacy and Margaret plan to temporarily exchange identities again, allowing Margaret to spend some quality time with Kevin. However, out of her desire for an inheritance of money, Margaret’s cousin Fiona (Hudgens) disguises herself as Margaret in order to be crowned queen instead and wreaks havoc over the kingdom.

Hudgens did an overall great job of playing three very different roles. One a baker from Chicago, one a British soon-to-be queen and one a sneaky, stuck-up rich girl with an ulterior motive.

This movie definitely kept me on the edge of my seat. There seemed to always be new problems arising for the two girls and their love lives. The end of the movie was definitely worth it, however, with happy endings for almost every character.

This is a feel good story. With some cheesy lines and a typical storyline, each character played their role and took on their character in a different, creative way making the movie stand out from others.

I loved how the director incorporated the winter season with this fairy tale movie and chose to make it take place on Christmas day. This was easy to tell from the start, with a scene that included Kevin and Margaret throwing powdered sugar at each other with Christmas music in the background. This added touch brings a whole new level of comfort and warmth to watching it, especially during a global pandemic.

With everything going on in the world, the storyline and atmosphere caused me to forget about current issues and repossess the wonderful feeling of the holiday season. I definitely recommend this film if you’re looking for a joyful, heartwarming, romantic story with traces of holiday spirit as well. I rate “The Princess Switch 2” a 9/10.