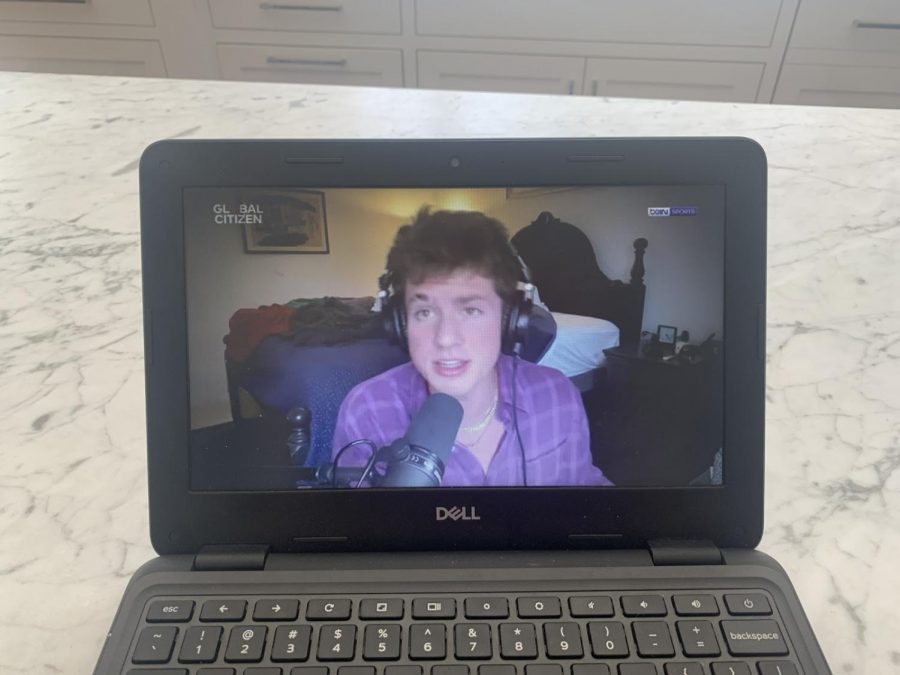 Concert viewing goes online, with viewers across the world enjoying virtual music festivals streaming on their tv, laptop and even their phones.

Due to the COVID-19 pandemic, millions of Americans are self-quarantining to slow the spread of this contagious disease. As the stay-at-home orders extended from weeks into months, many people began to struggle with feelings of disassociation, boredom and anxiety.  Activities such as playing on your PS2, trying to achieve TikTok stardom or binge-watching “Tiger King” on Netflix were all well and good during the first few weeks, but after that, there was a void.

“There is only so many times you can walk your dog,” Nina Udell ’20 said.

In past years, Americans bored after being cooped up during regular, non-pandemic winters turn to music festivals and concerts to entertain them. However, with gatherings of more than 10 being banned, there seemed no way that huge musical events like Gov Ball could take place. And when concerts began to be canceled — Billboard Magazine reported that SXSW in Austin, Texas was canceled on March 6 and Gov Ball was canceled on March 26 — it seemed as if this was “The Day the Music Died” that Don McLean sang about in his great American anthem “American Pie.”

Luckily, talented musicians across the globe emerged to recreate the spring music festivals that, if it weren’t for COVID-19, would be drawing in Americans as the weather began to warm up. Proving that they were creative in non-musical ways, these musicians thought “out of the box” to find ways to bring people together during this unique period of social isolation. In big ways and small, musicians gathered together on social media to bring music to the masses.

Some musicians kept it simple, providing free impromptu and very casual home performances on their Twitter or Instagram accounts. Using the hashtag #TogetherAtHome, Chris Martin of Coldplay played via live stream on Instagram on March 16, delighting his fans.   He was followed by John Legend and wife Chrissy Teigen, Charlie Puth, Shawn Mendes, Imagine Dragons and many more. These were very intimate performances with no production, home quality sound and little to no attention given to lights, wardrobe or stage. But they were a heartfelt and sweet way to keep Americans united through music even if, as noted by Shawn Mendes, it was played “with dogs in the background barking.”

Inspired by this unofficial #TogetherAtHome concert series in mid to late March, the World Health Organization and Global Citizen collaborated to create the “One World: Together At Home” global virtual concert event on April 18. With an enormous array of musicians, comedians, actors and performers, “One World: Together At Home” sought to bring music to everyone “to support and applaud healthcare workers on the fight against COVID-19.” This eight-hour concert included more than 100 artists like the Rolling Stones, Lady Gaga, Paul McCartney and Billie Eilish. The theme was empowerment, with songs like “Rise Up,” “Stand by Me” and “I Will Never Let You Down.” The event raised over $128 million towards vaccine development.

“The great thing about the online concerts is that you can tune in to the artists you really like and you don’t have to be stuck at the festival all day to catch them,” Julia DiConza ’21 said.

These musical links binding people together were replicated in many ways. From the orchestras across the country who played together via Zoom, to the Italian violinist who kept his neighbors entertained by playing from his balcony, it seems that music has truly worked to keep us together while we are at home.