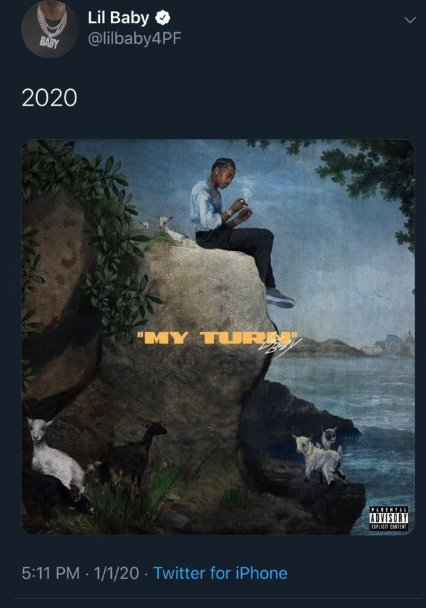 Lil Baby teasing his fans with his second studio album. He shared a cryptic message along with the cover of his new album.

Imagine being a dog and getting teased with a biscuit. Now imagine being a big rap fan and being teased over an album. Well, fans have waited long enough for Lil Baby to drop his second album, and they were not disappointed when he released “My Turn.”
The album was released on Feb. 28, 2020 by Capitol Records, Motown, Wolfpack Music Group and Quality Control Music.
Despite all the publicity and build-up for his second album, did fans believe that the album lived up to all the hype?
In short, yes. However, we must look at all aspects of how an album succeeds.
He landed his first No. 1 album on the Billboard 200 chart as the album debuts atop the tally with the biggest streaming week of 2020 for an album. This is a huge win for Lil Baby as he has beat out G Herbo and Bad Bunny for the top spot. He easily beat out those other artists simply because his new music was better than theirs.
“My Turn” tells the story of Lil Baby’s life in a manner that draws in everyone who listens to one song in the album. For an artist having the No. 1 album is a tremendous accomplishment, and that’s why it is even more impressive he did it with his second album.
Lil Baby’s album has 20 songs that span the full length of an hour, as well as having eight songs with features. The album has unique sounds and beats on many different songs. Songs like “Heating up,” “Sum to Prove,” “Commercial” and “Woah” all will go down as some of the best rap songs of 2020 due to the catchy beats and the lyrical genius of Baby. Those songs are some of the best in 2020 because you are able to connect to the lyrics and rap along with him.
With 20 songs on the finished product, Lil Baby is able to reach all aspects of the rap game right now. He raps fast on some songs while also having the ability of having his flow slow down to be heard clearly.
If an artists album lives up to the hype surrounding it then they will have a lot of album sales, and “My Turn” earned 197,000 equivalent album units in the U.S. in the week ending March 5, according to Nielsen Music/MRC Data.
Popular rapper NBA Youngboy sold 97,000 album units for his album “Still Flexin, Still steppin.” Lil Baby’s album doubled the amount of album units that NBA Youngboy sold, and in the rap industry this was seen as a massive win. This further concludes that Lil Baby lived up to the hype with his second album.
On the other hand, one might argue that there isn’t a number 1 song from the album so it didn’t live up to excitement. And I agree, there is not one absurdly amazing song from the album, but there are a handful of great ones and there are none that are bad. I would enjoy listening to any of the songs on the album.
Lil Baby absolutely crushed his second album and anyone who doesn’t agree should re-listen to the album and let it grow on them.