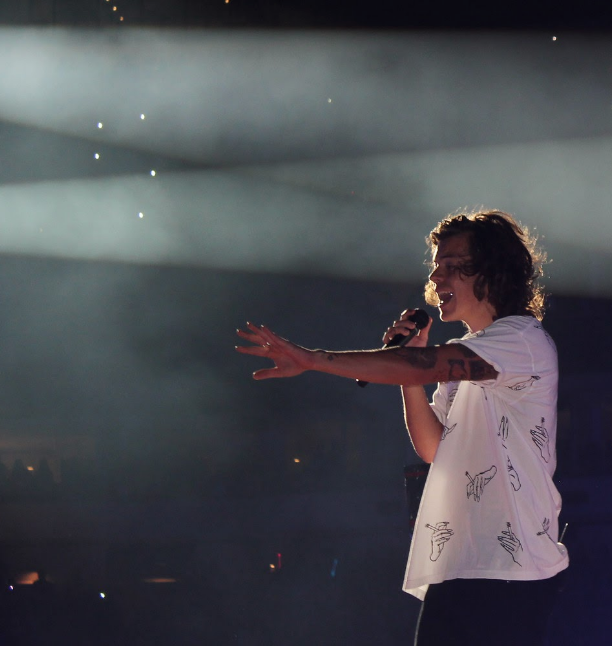 Harry Styles showed a new side of himself with the release of his second solo album, “Fine Line.”

We are all familiar with the famous boy band, One Direction, that ruled the radio stations for years. But when the group broke apart in 2015, one prominent member, Harry Styles, broke through to make a name for himself outside the group.
In the creation of his new album, “Fine Line,” Styles turned away from the classic love stuck beats of One Direction, and he turned towards a more ‘classic rock’ approach. I’m not gonna lie: before listening to the album, my expectations were pretty low. His husky voice complemented the other singers in One Direction, but when he released his first solo album ‘Harry Styles’ in 2017, his solo success didn’t seem too bright. Certain songs like “Sign of the Times” and “Ever Since New York” hit the charts on their own, but the rest just seemed to act as place holders to complete the album.
However, after listening to the new album, I was pleasantly surprised by the flow and Style’s unique way of incorporating influences from old-school rock into the songs.
Although Styles didn’t specifically credit his influence to anyone, The Rolling Stone compared his album to one’s of genre-fluid songwriters from the sixties and seventies such as, “Kid Harpoon, Jeff Bhasker, Greg Kurstin, and Amy Allen.” Personally, “Fine Line” brought me back to my time at New Orleans Jazz Fest. I couldn’t help but clap along to the gospel choir Styles called upon to help him sing the second to last song, “Treat People With Kindness”.
It wasn’t just the one song, however, that had me singing along; I found myself turning the volume all the way up from the album’s first song “Golden” to the final six minute of the final song “Fine Line.” I was captivated by the unity of the album. Each song seemed to be an addition to the last, telling Style’s story of heartbreak and reflection through the twelve songs. According to Pitch Fork, “Fine Line, in part, deals with Styles’ breakup with the French model Camille Rowe.” Meaning, these emotional beats seem to be summarizing his apologies to Rowe, showing the empathetic side of Styles.
In an interview with Paul McCartney, Styles talks about his journey stepping away from One Direction saying, “The nice thing for me is that I’m not coming away from the band feeling like I wasn’t able to do what I wanted to do.” And I feel like “Fine Line” is Style’s way of showing the world exactly that.