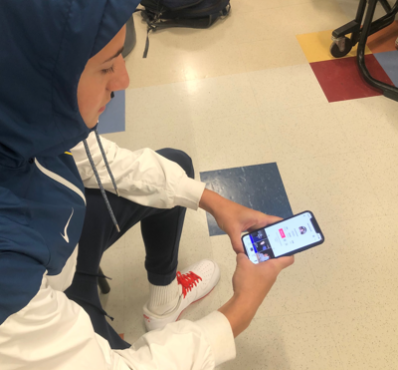 Luca Lombardo ’22, as well as many other Staples students, are avid users of TikTok and use the app for up to hours at a time. The app has become well-known as a huge source of procrastination for students.

The trending social media app TikTok, owned by the Chinese company ByteDance, will be under investigation on an undecided date by the U.S government due to allegations of spying on U.S. citizens. The Committee on Foreign Investment in the United States has contacted ByteDance and articulated the matter at hand.

The company is allegedly sharing user’s data with the Chinese government. Senate Democratic Leader Chuck Schumer and Republican Senator Tom Cotton got involved in the situation and said in a letter, “With over 110 million downloads in the U.S. alone, TikTok is a potential counterintelligence threat we cannot ignore.”

“As someone who uses the app on a daily basis, I am definitely worried about my safety and privacy,” Luca Lombardo ’22, a TikTok user with over 400,000 followers said. “If this issue continues to grow, it will potentially remove a lot of TikTok’s regular users off of the app.”

Originally called Musical.ly, the app was released in Nov.  2017, which gave individuals of all ages a platform to share videos of them dancing or lip-syncing to songs. While the app was beloved for a brief period in 2017, the app has regained popularity recently with the new name TikTok, an opportunity for the app to rebrand itself. The app has made $40 million in revenue.

TikTok has over one billion monthly users, whose ages vary between 16 and 24. Users spend an average of 52 minutes a day on the app, which is why these privacy concerns can be detrimental.

Despite these accusations, the app is trying to remain calm and assure its users everything is under control.

“While we cannot comment on ongoing regulatory processes TikTok has made clear that we have no higher priority than earning the trust of users and regulators in the U.S,” a TikTok spokesperson said. “Part of that effort includes working with Congress and we are committed to doing so.”

Although there seems to be a major issue developing with TikTok, some users don’t mind the risks.

“While there does seem to be a problem, it definitely won’t stop me from using the app because I don’t know for sure if the allegations are true,” Hannah Kail ’22 said. “I really enjoy using TikTok and I can’t see that changing.”