‘The Politician’ exceeds expectations of trailer 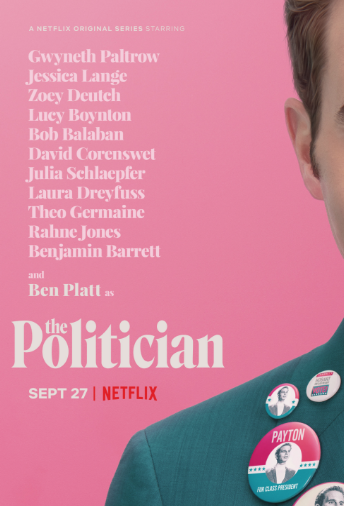 “The Politician” premiered on Netflix on Sept. 27, 2019, which starred Ben Platt, who aspires to be President of the United States one day.

For those who love binge-watching comedy and politics, the wait is finally over for the new up-and-coming show, “The Politician.” As of Sept. 27, 2019, it is available for viewing on Netflix.
The show is directed by the American screenwriter, director and producer Ryan Murphy, who also directed “Glee” and “American Horror Story.” The show stars Ben Platt (known for his role in Broadway’s “Dear Evan Hansen”), as well as Gwyneth Paltrow and Bette Midler. When hearing the cast list, I immediately knew the show would have a lot to offer with its characters.
“The Politician” features highschool student Payton Hobart (Ben Platt) as an aspiring politician, in the wealthy city of Santa Barbara, California. Hobart’s first step is to be elected student body president, but he encounters obstacles along the way. These obstacles include his merciless classmates and his running mate, Infinity Jackson, (Zoey Deutch), who is accused of homophobia. Each season showcases different political races that Hobart takes place in.
The first time I glanced at the trailer, I have to admit that I was confused. The preview does not offer the plot in a sequence from beginning to end, but rather as a compilation of chaotic events. The attempt may have been to lure the viewer into wanting more, however, the array of discombobulation left me, and I am sure others, with a sense of confusion.
So, when diving into the first few dense episodes of the series, I went in with low expectations. But I was pleased to find that I liked more than I disliked.
I was intrigued by Benjamin Hobart’s character. His main goal before becoming president is getting into Harvard, and he will not have his parents pay his way in as they did for his brothers. His assertive and tenacious personality when convincing Harvard admissions to let him in certainly had me aspiring to be more like him. He had a goal, and would not rest until he achieved it. I think everyone wishes they possessed the aspiration that Hobart carries throughout the show because it got him places, including a spot at Harvard.
It is evident in the series that Hobart is a determined boy, and that his own mother fears how much he wants things. He battles multiple struggles in his life: the death of a friend, discovering his sexuality and dealing with a running mate who may not be who she says she is. Despite all of this, Hobart perseveres and focuses on his campaign and future.
There were some instances of confusion, however. An event that I found misleading was an unexpected suicide of the character River, (David Corenswet). This threw me off due to the unanticipated actions that River took to end his life. Although River killed himself, the show made it clear that River was healthy and happy. It seemed as though River was going to contribute a prominent role in the series, but suddenly he was cut out of the show, which really took an unfortunate turn. The incident also occurred right after a flashback took place, making it unclear if it took place in the past or the present day.
Nevertheless, I liked most of the surprising twists that constantly kept me at the edge of my seat. An appealing hook the show provided is towards the end of the first episode when the possible identity of Infinity Jackson is revealed.
Politics are certainly not my forte, and yet, I was entertained.
So, if you are interested in the concept of the show, yet are set back from the trailer, I suggest giving the show a try. The positives “The Politician” supplies outweigh the misconception that the trailer reveals.