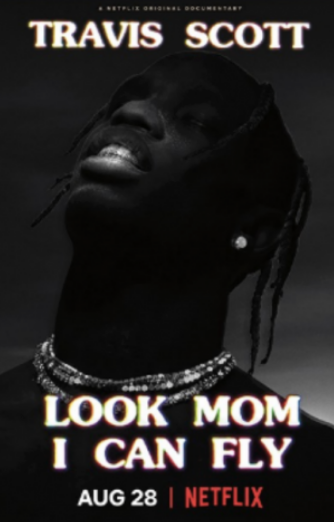 The poster cover for the documentary, "Look Mom I Can Fly" exhibits Travis Scott as the focal point.

Flashing lights, screaming fans, and crowds of people anxiously wait for Travis Scott to light up the arena. Travis scott, a renowned performer and arguably one of the most famous artists of our generation, steps off this flashing stage and onto the big screen, with his new documentary, “Look Mom I Can Fly.”
The highly anticipated documentary was released on Netflix on Aug. 28. The movie followed Scott’s steps to stardom and success through his several albums as an artist. Not only did the documentary provide insight about his work behind the scenes, but also it gave viewers a rare insight into Scott’s private life. This was interesting to fans because Scott has seemingly always been avid on keeping his life exclusive, a movie showcasing every aspect seemed to be out of character.
While Scott has historically been open about his message and music, fans receive limited details on Scott’s perspective on his relationship with his fans. Throughout each show, Scott entertains the crowd by incorporating audience interaction.
For example, Scott invites fans onstage or throws gifts to the fans at his shows. Through these actions, it is clear to see how grateful Scott is to be at the level of stardom he is today, all thanks to his “ragers” – Scotts fan base name.
Another component of the documentary is the panels that flashback into Scott’s childhood. These flashbacks show his less than fortunate upbringing. The movie takes us into his childhood home, where he lived with his grandma and shared a small room with his brother in South Park, Houston, an area known to be crime-heavy at the time.
His upbringing shows a very drastic shift in lifestyles compared to the wealth Scott now has. Scott acknowledges this throughout his documentary and I think the movie purposefully enhances Scotts appreciation for his fans and what they have essentially provided for him today.
The documentary, “Look Mom I Can Fly,” shows that despite Scott’s success, he remains the humble and grounded boy from Houston. To me, throughout all aspects of the movie, Scott makes it apparent that his dedication to his work stems from his loving and devoted fans. Scott makes it clear that the rest of his work will be in appreciation for what they have granted for him.