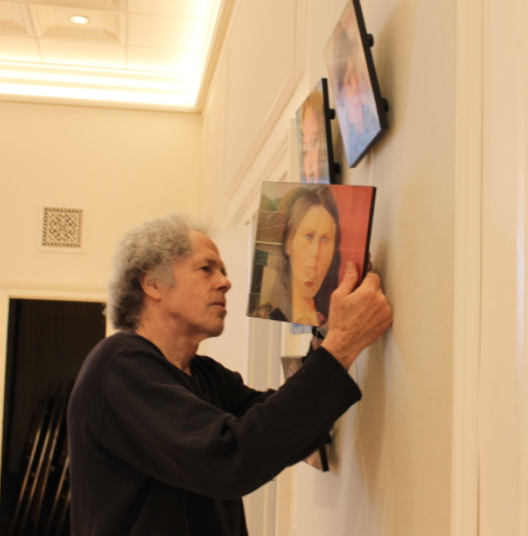 Miggs Burroughs hangs his lenticular art the day before the show.

Behind every good piece of art is a strong artist and behind every great artist, there is a story. On Saturday April 27, Sunday the 28 and Monday the 29, the Westport Women’s Club hosted its fifth annual Art Show.

In addition to showing his work at the event, Burroughs curated the function. Burroughs grew up surrounded by artists, both friends and family. After graduating from Staples, he then attended Carnegie Tech as a drama student.

Although Burroughs once painted, he is now a graphic artist designing logos, websites, posters and more. The pieces he presented were images where if someone looked at them from one angle they would resemble a different image than if looked at from a different angle.

“I was looking through old birthday cards that my parents had saved that were sent to me…[on one card] there was a little picture of a baseball player on the front that moved when I moved the card. The baseball player would swing the bat.”  Burroughs said.

The process of making this type of art is called lenticular printing. On a computer, lenticular lenses give the illusion that a picture is moving of changing from different lenses. Burroughs’s background in graphic design combined with the recovering of a memento from his childhood gave him the ability to create something unparalleled at the show.

“Here I am as an adult looking at that and thinking ‘This would be so cool if it could be bigger. Imagine what you could do.’”

With Burroughs, who also helped to curate a roster of artists, Art Show Event Chair Jo Fuchs-Luscombe organized the function. A past president of the Westport Women’s Club, Fuchs-Luscombe has held her position for the past five years.

She is in responsible for generating a committee and delegating responsibilities to each member. She described her job by simply saying, “I make sure that everything happens.”  Before she was a part of the Westport Women’s Club and this event, Fuchs-Luscombe put on an art show, also with Burroughs, at Hall-Brooke Behavioral Health.

“My favorite part is that we are able to do many things in one fell swoop. We benefit the artists because we give them exposure, they in turn benefit us because they give us 30% of everything that sells, they bring people into to the house which is of great benefit because some become members after they have been here,” Fuchs-Luscombe said.

One of the artists she worked with, Hernan Garcia, had some still lifes and abstract paintings on display at the show. Garcia enjoyed studying at Scuola per II arte E II restauro Di Firenze, Italy. He taught and wrote at an academy in Bogota, Colombia, Garcia’s place of birth. When painting, Garcia still utilizes a technique he learned in art school. “When I studied in Europe… the professor send you to ruins or something like that … to see the original, and you stay there two hours to make a sketch. You aren’t allowed to use a camera or anything like that because you need to do it in the way they did it in the 18th or 16th century.” Garcia said.

Like Garcia, Burroughs was excited for what this year’s show could mean for people’s knowledge of Westport and the nature of its arts. “I think people know Westport as a an arts community… they don’t always  see the depth of it and the breadth of it, I mean it is so diverse…” Burroughs said. “The value of the show is to show Westport arts are still alive and well.”