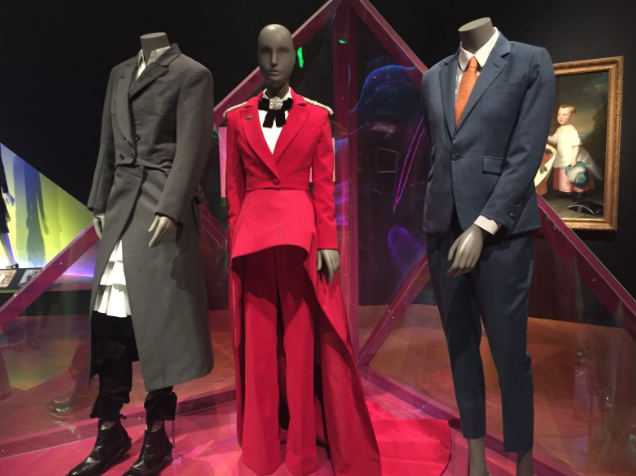 The Museum of Fine Arts, Boston showcases their temporary Gender Bending Fashion exhibit that features many famous pieces worn by actors and musicians throughout history.

From art conventions held at the Javits Center in New York City to the Eugène Delacroix exhibit at the Metropolitan Museum of Art, Staples art students have always had amazing opportunities to see outstanding works of art. On April 9, students saw art from Frida Kahlo at the Museum of Fine Arts in Boston.

Art teacher Camille Eskell organizes these art trips every year. She particularly wanted to visit the exhibit with her students after she saw it at the Victoria and Albert Museum in London. Although it’s difficult to find local museums that can accommodate large groups of students, Eskell was able to make this experience a reality.

“I wanted to take the students to see the Frida Kahlo show in Brooklyn…but you couldn’t get a ticket and they couldn’t accommodate us,” Eskell said. “There were too many other schools that had asked prior to us…When I saw Boston was doing a Frida Kahlo show and it was written up [in the news], I decided to go there this [trip].”

Boston’s Frida Kahlo exhibit featured many works from her repertoire, including a few of her self-portraits and fruit bowl paintings. Students have studied some of these pieces and have learned about the various techniques and styles artists use, so it was exciting for the them to see some of Kahlo’s art in person.

“I really liked the paintings of the fruit that she did because they looked 3D even though they were two-dimensional,” Isabella Berg ’20 said. “The colors that she used were really vibrant and unlike anything else I’d seen.”

Although Eskell didn’t find the Frida Kahlo exhibit as impressive as the students did, they still had a chance to see artwork around the Museum of Fine Arts.

“There were only three rooms and the way it was talked about in the paper, it sounded like it was more than that,” Eskell said. “I was really surprised and kind of bummed, but the kids enjoyed it because they saw more than just that.”

Aside from the Frida Kahlo exhibit, the Museum of Fine Arts is well known for its contemporary art that’s seen all around the museum. Students also seemed to enjoy their Gender Bending Fashion exhibit, which features garments worn by David Bowie and Jimi Hendrix.

“I just like to see art,” Anne Machata ’20 said. “I think it’s interesting to see what other people do for not necessarily inspiration but it certainly does help.”