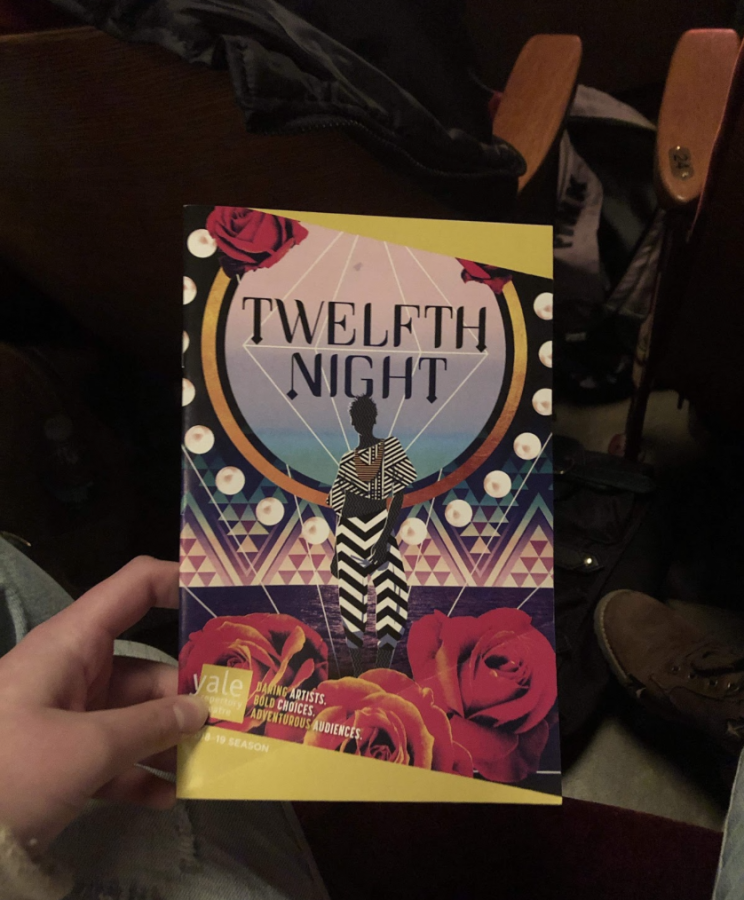 Sasha Barnett holds the playbill for Yale Repertory Theater’s “Twelfth Night” in anticipation for the show on Wednesday, April 3.

Staples theater and Shakespeare students were transported into a fusion world of Shakespeare, romantic comedy and afro-futuristic science-fiction on Wednesday, April 3. The two departments went on a field trip to see Shakespeare’s “Twelfth Night” performed at the Yale Repertory Theater.

Featuring hip-hop music and dancing, the play was an insight into director Carl Cofield’s contemporary Shakespeare vision. The cast was comprised entirely of people of color, including Abubakr Ali portraying Sir Andrew Aguecheek and Erron Crawford as Feste, to name a few.

“I thought it was great that the production provided representation for minorities,” AnnaMaria Fernandez ’20 said. “[Theater is] a field that doesn’t usually have that.”

The afro-futuristic style of the performance took a fresh take on one of Shakespeare’s classics. “[Afro-futuristic] is sort of a stylistic choice of combining science-fiction elements with traditional African design,” Joshua Horowitz ’19 said. “It’s something that I think very few people would associate with Shakespeare and I thought it was a really interesting way to take it, and it was a very well performed piece.”

The show included science-fiction style lighting effects with glow-in-the-dark sections and rapid color-changing lighting during songs. “The futuristic technology and culture infused into the classical play made it incredible to watch,” Madeleine Edwards ’21 said.

The field trip also allowed theater and Shakespeare students to see their curriculum applied to real-world productions. “My theater class has been working on Shakespeare right now, so I thought that seeing a Shakespeare show in the middle of our Shakespeare unit would be really fun,” Annabel Kavetas ’20 said. “I got to see how people took Shakespeare’s work and turned it into an enjoyable show that didn’t feel like work to watch.”

For students who aren’t studying the craft of Shakespeare, it provided them the opportunity to see the playwright’s work in a new light. “I never thought I would enjoy Shakespeare ever in my life, but this show was amazing,” Sasha Barnett ’22 said. “I would go see that show 100 more times if I could.”

But one of the best parts of the trip came after the performance had finished. “My favorite part of the trip was the end before we went home, which is when we did a talkback,” Colin Konstanty ’22 said. “Everyone who stayed got to ask questions to the cast about their process and their experience throughout the show… I got to see so many people ask really good questions to the cast. It was interesting to see how the members of the cast responded.”

The play ended it’s near two-month run on April 6, but the talkback enhanced the message of the afro-futuristic vision to make its impact everlasting. “There was something a cast member said that stuck with me,” Edwards said. “It was along the lines of that it’s sad that having a cast made up of people of color is a special and rare thing in the 21st century, but he was proud to be a part of it. That very much sums up the experience. The fact that it’s rare to see Shakespeare performed by people who aren’t white is disheartening, but it was a very inspiring production.”