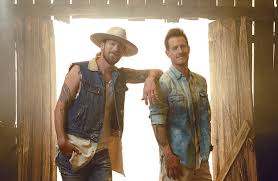 After three years of singles and feature hits, Florida Georgia Line’s fourth album, “Can’t Say I Ain’t Country,” is their most diverse and well put together album. One week after its release  at exactly midnight on Friday, Feb. 15, it sped to number one on Billboard’s top country album charts.

Tyler Hubbard and Brian Kelley included a variety of feature stars such as Jason Aldean, Hardy and pop star, Jason Derulo, giving lots of variety to the 19-song album.

One especially unique aspect of the album is its four “skits.” These are four short voicemail clips from a friend that perfectly segway into the next song. “It’s something different for us, something cool, something a lot of other artists are doing in the urban and hip hop world, but nobody’s really done it in country,” Hubbard told KIX radio.

Four songs were released early, including “Simple” and “Talk You Out Of It,” two songs very high on today’s Billboard charts.

What made this album great was the mix of slow, upbeat, and classic songs. The slow songs, “Told You,” “Blessings,” “People Are Different” and “Women” (featuring Jason Derulo) all have very unique guitar play and meaningful lyrics. If you listen to the album in order, beyond the skits setting up songs, you see how FGL strategically giving breaks in the action between the upbeat songs.

“Speed Of Love” and “Swerve” are very upbeat songs. This is something different than what fans have been accustomed to in the past, but this is the theme of the album. These are great songs to turn up in the car and have very exciting beats.

My favorite songs from the album are are “Y’all Boys” and “Can’t Say I Ain’t Country.” These songs both spoke measures about Hubbard and Kelley’s backgrounds. “Y’all Boys” is all about their childhoods, in their small town homes with unlocked doors and how they made lifelong relationships. This song has their most traditional hook and chorus, with a beat that builds up followed by a simple and catchy chorus.  “Can’t Say I Ain’t Country” notes some of the group’s criticisms in the past. Some people call them more pop than country because of the way they have branched out but like other songs, the note their roots and where they have come from in a unique way. A feature from up and coming artist Hardy makes this an all around exciting song.

This album didn’t disappoint, and to true country fans, there really isn’t a song on the album to skip over. The band soon goes on tour with country stars Dan + Shay and Morgan Wallen to highlight this album release. These songs add to a long list of hits over their short, but very successful career.