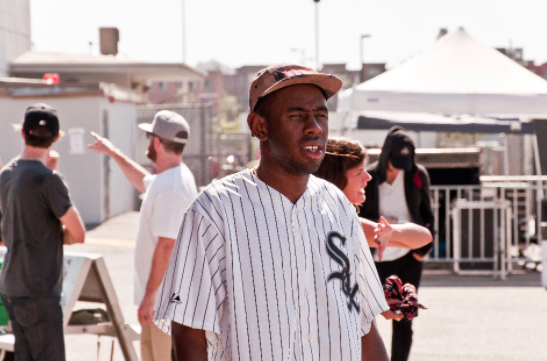 Rapper Tyler the Creator never fails to provoke his audience. Even when devoted fans expect the unexpected, Tyler easily pushes boundaries and shamelessly alludes to the most controversial of topics in a great deal of his music. A rebel in his art, the edgy musician switched gears on his 2017 album, “Flower Boy.” As one critic wrote for Pitchfork, critics and fans alike recognized the album as  “Tyler’s course-correction, surprisingly meditative and beautifully colored, a collage of memories and daydreams that trades bratty subversion for reflection and self-improvement.”

That’s why the surprise release of Tyler the Creator’s single, “Okra,” was such a shock. Not only were fans unaware that new music was coming, but the song itself is back to Tyler’s old ways. “[Okra is] different in a good way,” Brynn Schumacher ’18 said.

The track, described as “a throwaway song” by the artist in the description of the “Okra” music video on Youtube, is minimalist. It sports neither theatricality in the music video nor production embellishments, but rather a simple beat on which Tyler can unleash a smooth bars of wordplay. On “Okra,” Tyler seems tightly focused on proving that no matter how artsy he got on “Flower Boy,” he’s in the rap game as a result of his uncut talent both in his lyricism and ability to deliver his raps seamlessly.

“I like it and feel like he has really grown into his own with his music,” Anna Uman ’19 said.

As in the old days, Tyler takes more than a few jabs at fellow celebrities, such as Mary-Kate Olsen, and alludes to events in his personal life, such as the disappearance of Tyler’s group, Odd Future, from the music game. “My favorite line ever is when he says ‘tell Tim Chalamet to come get at me,’” Alex Berman ’19 said. Unapologetic as ever, Tyler blows past these edgy moments to flex and discuss his success as he references his $30,000 Balenciaga travel bags and $400,000 McLaren, a car he has hinted at wanting ever since 2015 album “Cherry Bomb.”

“I like the song… He talks a lot of trash on it and brags about his extravagant lifestyle,” Thomas Quigley ’18 said. “But he lacks the depth and honesty he showed on his last album.”

All in all, “Okra” is certainly worth a listen. In a show of undeniable talent, Tyler the Creator mysteriously emerged from the background of the music scene with his surprise track, impressing with his wordsmithery and reigniting fans’ curiosity as to what’s next for Tyler the Creator.