“The Commuter” makes for an enjoyable thriller despite low ratings 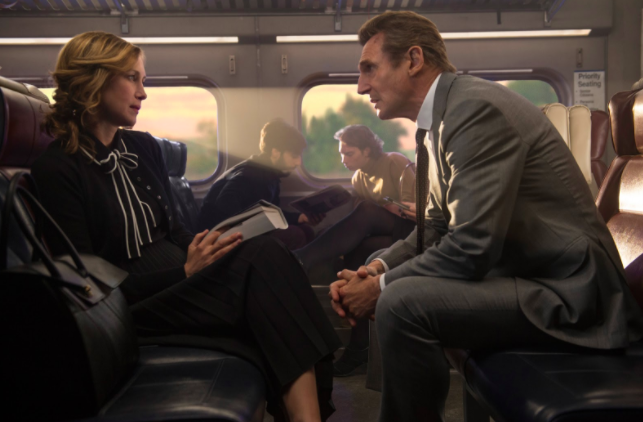 Mystery, murder, melodrama. The movie “The Commuter” provides the audience with all three of these things, but not much more.

Liam Neeson takes on the role of 60 year old Michael MacCauley, who has recently been laid off from his job as an insurance salesman. While on the train home from work, he is approached by a woman named Joanna, played by Vera Farmiga, who offers him cash hidden on the train totaling $100,000 in return for him finding the identity of someone going by the alias “Prynne.” By accepting her offer he is thrown into a race against time as he must find Prynne before the last stop on the train.

I found it impressive that they managed to produce a 105 minute movie with only one setting. However, this element helped display not only the pressure MacCauley is under, but the fact that he has no help from the outside. At one point he does attempt to contact the police through his acquaintance on the outside, Walt. However shortly after MacCauley’s conversation with him on the phone, Walt gets hit by a bus. So much for that plan.

“The Commuter” was released in the U.S. on Jan. 12 and is currently ranked third in the box office. Due to tough competition with hit movies like “Jumanji: Welcome to the Jungle” and “The Post,” it failed to break even, making $22.6 million with a budget of $30 million.

The movie attracted attention for its A-list cast consisting of Vera Farmiga, Patrick Wilson, Sam Neill, Elizabeth McGovern and, of course, Liam Neeson. However, despite its star studded cast, “The Commuter” was not well received by critics. Many found the plot to be unsubstantial and full of plot holes, and as a result it was rated a subpar 5.3/10 on Rotten Tomatoes.

“If you don’t think too hard about why Neeson gets brought in or how the baddies operate or what the point is, you may be able to enjoy yourself,” noted Matthew Lickona, a critic for the San Diego Reader and a top critic on Rotten Tomatoes. “At least until the final act, when the film goes off the rails. Like a train might do.”

I agree that the plot was a little more than lacking and the implausibility of some scenes was glaring at times. However, I would also argue that the film does exactly what it intended to do: provides the audience with a fairly unique mystery, unexpected twists, large explosions and action packed scenes where Liam Neeson fights off strangers in tightly enclosed spaces. What more could you ask of a thriller?

By the end of the the movie I was thoroughly confused about where one plot twist ended and the next began, but I had enjoyed it nonetheless. If you want a film solely for the action, or Liam Neeson, “The Commuter” is a good choice. However if you’re looking for a film that will challenge your mind and spark your intellectual curiosity with meaningful complexity and compelling themes, I suggest you look elsewhere.