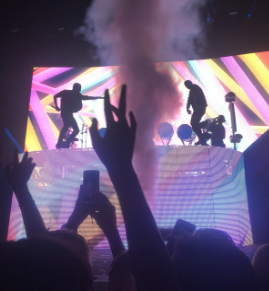 From the time the doors opened at the Galantis concert at Hammerstein Ballroom in Manhattan to the time they closed, the positive and excited energy of the crowd was contagious.

Galantis fans, known as “Sea Foxes,” who attended their concert on April 7, were met with loud beats, colorful confetti and wild backdrops that enticed them throughout the night.

“It was one of the best nights of my life,” Rebecca Duncan ’19 said.

The concert was opened by artist “Hook N Sling,” who got the crowd in an upbeat mood. His performance lasted an hour on a smaller stage making the crowd antsy to see the main performers.

Once on stage, Linus Eklöw and Christian Karlsson performed a collection of electronic dance music, and because they were not singing, they were strategically moving around the stage. With CGI projected on a large screen and confetti blasting into the air, the band kept the audience engaged for a full three-hour period.

Galantis not only played their original music, but also remixed popular songs that were received enthusiastically from the crowd. “I listen to their music all the time, and they definitely did not disappoint when I saw them in concert,” Cece Marino ’19 said.

Galantis has been recording, releasing and performing live for over two years, and has been nominated for two Emmy awards for the song, “Run Away (U & I)”.