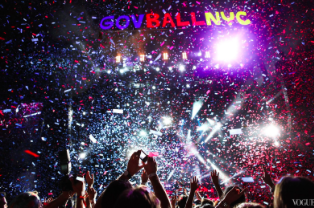 While it seems like the distant future, the warmth is approaching as well as the sought-after season of music festivals. The Governors Ball Music Festival, or Gov Ball, is in Randall’s Island, New York from June 2 to June 4. The festival will host the most famous and talented artists from various genres of music, while also including up-and-coming musicians seeking their big break. On Jan. 4, the lineup for the three-day festival was announced. Here are my initial reactions:

Hip Hop/Rap dominates the lineup
After a stellar performance at Meadows Music and Art’s Festival in October, multiple appearances on “Saturday Night Live” and an overall incredible year, Chicago native, Chance the Rapper returns to New York to headline Gov Ball. Chance’s unique voice and talent has given him recognition from Kanye West, which ultimately led to an incredible feature on West’s “Ultralight Beam.” Chance has been nominated for seven Grammys, and is the first streaming-only artist ever to be nominated for any Grammy. Expect something big from Chance the Rapper at Gov Ball this summer.

After releasing one of the best R&B albums of the year, and winning a Golden globe for creating, writing, directing and starring in comedy series, “Atlanta”, Donald Glover a.k.a. Childish Gambino does not appear to be slowing down. His album “Awaken, My Love!” is one of the best produced albums of the year. His smash hit “Redbone,” features a slow keyboard rhythm accompanied by Glover’s incredibly unique high pitched voice. “Bravo” to Gov Ball for booking Donald Glover.
Rumor has it, Glover and Chance the Rapper are working on a mixtape
together. Will there be a collaborative performance? That could be some sort of history in the making. We’ll just have to find out in June.
Wu Tang Clan, an older rap group based out of Staten Island, New York, will be performing. Many people are excited about this one. Wu Tang Clan will be releasing a reunion album sometime this year, which will make for a new and exciting performance.
Other notable rap performers: Wiz Khalifa, Rae Sremmund, A$AP Ferg, Schoolboy Q and grime artist Skepta. Overall, there is way too much Hip Hop/Rap. However, at least they picked the right people to perform.

Tool makes a surprise appearance
With it’s first New York City gig in over a decade, the rock band based out of Los Angeles, Tool is booked to headline Gov Ball. In an interview with Consequence of Sound, the Gov Ball festival bookers spoke about why they chose Tool as a headliner.
“Tool is an act we’ve wanted to book ever since we started the festival. We always strive to book artists that haven’t performed in the market in a long time. This will be Tool’s first show in New York City in over a decade,” the festival bookers said. “That’s — not only for their hardcore fanbase, which is pretty massive, but for people attending the festival who have never seen Tool live before — a really big deal to finally see because they’re far and away one of the biggest rock bands in the world.”
This is a truly incredible booking by the Gov Ball festival bookers. Music Festivals pre-date rock n’ roll, it is only appropriate for there to be a rock band, a talented rock band like Tool nonetheless, to headline an up-and-coming festival like Gov Ball.

Where is the EDM?
Besides Marshmello and Flume, there aren’t any real EDM (electronic dance music) headliners. Marshmello had an absolutely unreal year, capping it off performing with Skrillex and Justin Bieber at the Fontainebleau in Miami for New Years Eve. He even scored an interview with CNN. Flume is another great producer/DJ who creates hit after hit after hit. Having said that, I am extremely disappointed with the lack of popular EDM headliners. Dance music is a rapidly growing genre with a huge fanbase that keeps on growing year after year. Gov Ball festival bookers: Those who love EDM are also those who are willing to go to festivals. They are the type of fans willing to buy tickets. Keep that in mind.

Who’s not performing (that should be).
Frank Ocean! After releasing what I think was the best album of the year, Frank Ocean will not be performing at neither GovBall nor Coachella (Gov Ball “sister festival” in California). Ocean’s latest album Blonde was a long awaited release after his debut album Channel Orange was released in 2012. Ocean made his fans wait six years for any music. Ocean will be performing at festivals mostly outside the U.S. However, he is booked to headline Panorama Music Festival in July, which is in New York. I still have hope that Ocean will make a guest appearance at Gov Ball…please do Frank, please do.

Conclusion
Overall amazing job by Gov Ball festival bookers. They brought together stars of today with stars of tomorrow. With an unreal Hip Hop/ Rap selection and strong indie and alternative artists across the board, this will likely be the most star studded, talent filled, Gov Ball yet. I would give this lineup a rank of 9/10.