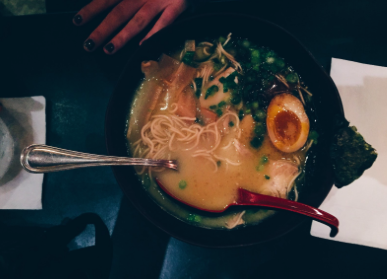 By. Molly Liebergall ’17 and Anay Simunovic ’18

Located at 1215 Post Road in Fairfield, Mecha Noodle Bar is an Asian restaurant serving everything from Vietnamese pho, to Korean fried chicken bao, to Japanese ramen.  Judging by the crowd constantly packing the open dining area—even on weeknights—Mecha has become just as popular as Milkcraft and Flipside Burgers & Bar, which are situated next door and across the street, respectively.

Pork belly steamed baos—Asian American inspired fluffy buns—arrived first. The initial bite of the appetizer ignited a burst of flavor and texture. The thick dough enveloped a piece of crisp fried chicken which was complemented perfectly by the tang of pickles, shredded carrot and sweet and spicy homemade sauce.

Next, we shared one of the restaurant’s most popular ramen dishes, the tonkotsu. As soon as the oversized bowl was brought to our seats, we were overwhelmed by the aromatic oils. Tonkotsu is a type of pork ramen with chasu, spicy sprouts, egg, and scallion. At first, we were skeptical about the strange-sounding ingredients; however, as soon as we tasted the steaming broth, all of our doubts vanished.

The various vegetables mixed into the soup added a crunch and a contrast in flavor from the hearty, creamy broth. The egg was softly cooked to perfection, and the yolk was just slightly runny. Lastly, the pork was so tender, it nearly slipped off the spoon. After finishing our first round, we called out, “kae-dama,” which is the restaurant’s signal for the waiting staff to bring another serving of noodles for a small charge of $2.

Once we finished off the bowl of ramen, our pho tai—Mecha’s classic dish consisting of beef and chicken broth, cilantro, rice noodles, scallions, rare beef, and onions—arrived.  Unlike the ramen bowls, the pho was sweeter, with hints of lime accenting the flavor.  Alongside our meal was a bowl of fresh bean sprouts and two sauces—one spicy and one slightly less so—to add to the soup.

Our recommendation? Indulge in all of the add-ons. The best part about Mecha’s satiating food is how it combines a wide variety of flavors in order to create a masterpiece for the pallet.  Be sure to branch out and try any number of dishes, especially if they include ingredients you may have never even heard of before.