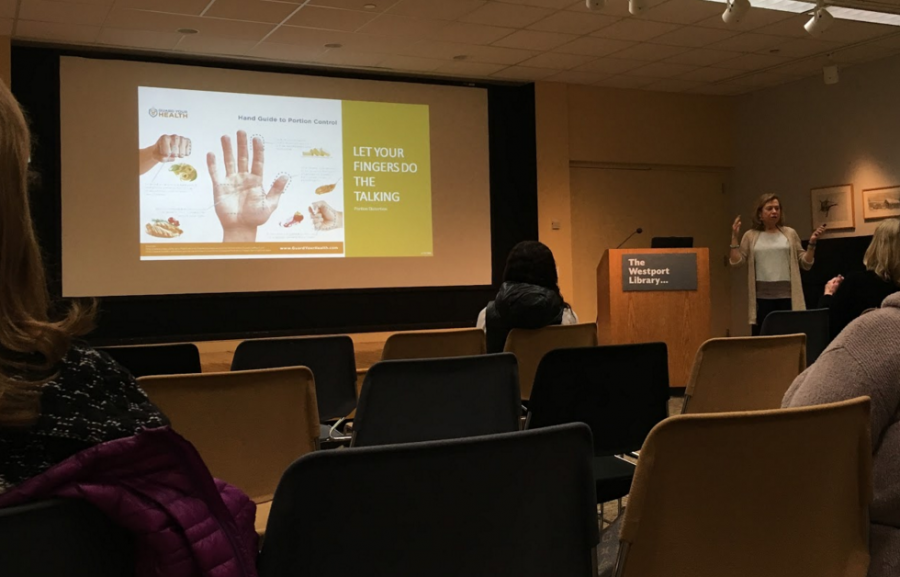 Clinical nutritionist Donna Brown and principal of Nutrition Kitchen talked to Westport parents at the Westport public library on March 29th about healthy nutrition and diets for teen athletes.

Brown’s goal is to make sure young athletes are performing at their best.

A study was shown between two hockey teams to show how a healthy diet enhances the player’s performance. One team had been on a healthy eating plan prior to playing and showed better performance throughout the entire game whereas the team who had not eaten healthier prior to the game seemed more tired and dehydrated.

“Whenever I eat unhealthy before a game, it lags me down on the field,” Erik Berlin ’17 said.

Brown explains the key things to staying healthy are when you eat, what you eat, and recovering after exercise. She also explains that staying hydrated at all times is a big part of this. Many teen athletes use sports drinks, such as gatorade, to stay hydrated, but they really have little nutrition.

Brown’s eating plan before and after exercising:

“The worst feeling is getting tired or getting cramps while exercising. I hate having to stop mid-workout if I don’t feel energized enough,” Sophie Epstein ’17 said.

Besides when you eat, what you eat is obviously one of the biggest roles. It is important to include macronutrients (carbs, proteins and fats), micronutrients (vitamins and minerals) and water in your diet as well as keeping in mind that you should be eating 60:20:20 ratio of carbohydrates to proteins to fats.

Although proteins are still important, many athletes think more protein makes you strong, but that is not the case, carbohydrates fuel muscles. Carbohydrates include fruits and vegetables.

“If you are a very intense exerciser, you’re going to need that high level of carbohydrates,” Brown said.

What you choose to eat should be mainly whole foods and minimal if not no processed food. Completely taking sugar out of your everyday diet is important because it has shown to cause health issues later in life. Eating a variety of foods and colors of foods is also very important.

Whether or not young athletes follow these healthy eating habits are up to them, but Brown argues that “nutritional status plays a very important role in your athleticism.”