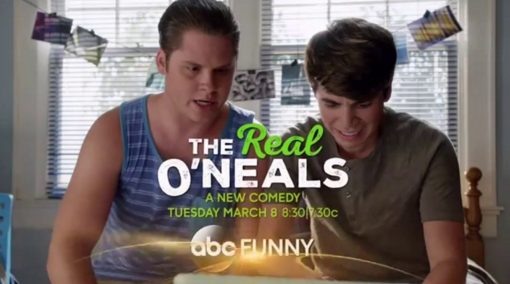 “The Real O’Neals” tells the story of an Irish-Catholic family with a judgemental mother who tries to paint the picture of a perfect family. ABC has aired a few episodes and so far I like the show because I think it covers serious topics in a humorous manner with likeable characters.

In the premiere, we see a somewhat dysfunctional family with each member keeping secrets. It seems to me that in trying to look perfect on the outside, they were not being true to themselves. By the end of the first episode, each character reveals the big secret that they have been hiding.

The mother and father, Eileen and Pat, who are played by Martha Plimpton and Jay Ferguson tell their children that they have been going to therapy as they are getting a divorce. Once that bombshell is disclosed, each of the children tell their secrets. The oldest child, Jimmy, played by Matt Shively shares that he is anorexic. The youngest, Shannon, played by Bebe Wood confesses that she is a thief. The middle child, Kenny, played by Noah Galvin, announces that he is gay. Each character adds their own flavor of comedy to the show.

While they had been keeping secrets that they didn’t think the others could handle, I think that once each told the truth it brought them closer together. And in the final scene, it was funny when Eileen’s nemesis, Marcia Worthman, played by Sarayu Blue, wins their canoe in a low bid in the silent auction at the church bingo event, and the family works together to steal it back.

One of the things I like the most about the show are the humorous dream sequences of the main character, Kenny, throughout each episode. For example, in the pilot he has a conversation with Jesus about what he’s going to order while out to dinner .
Check out the next episode on ABC on Tuesday at 8:30pm.