All ups and downs at the Oscars 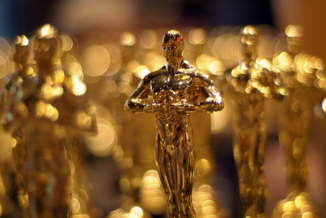 This year’s Oscars proved to be just surprising enough to shake things up.

Did you spend your precious Sunday evening catching Hollywood patting itself on the back for three hours? Darn right you did! In all seriousness though, whether you tuned in for the posh pageantry or not, here are this humble (dabbling) movie critic’s cheers and jeers for the night:

Winner: Leo gets the gold.
– The Hatfields and the McCoys, the Red Sox and the Yankees, Staples and Darien: all these rivalries are legendary yet none match the beef between all-star Leonardo Dicaprio and the Academy. If you’re lucky enough to have never heard about/agonized over the injustice, the Academy snubbed Dicaprio for decades despite him being a continual common champion of critics and audiences. Well, Leo finally seized the award and delivered an elegant speech to boot (plenty of years to practice, I guess) with the roar of a standing ‘o’ as his soundtrack. It may sound like I’m romanticizing: I’m not.
Loser: Gaga doesn’t.
– Meanwhile, Lady Gaga laid out a powerhouse performance, crooning her nominated anthem for sexual assault  victims “Till It Happens to You” with especial force and purpose (So much so that even the Joe Biden appearance beforehand was appropriately upstaged). It was a tour de force so it surely set the precedent, right? The Academy, in all of its clairvoyance and artistic enlightenment, recognized this raw talent long before and handed over the statue? Nope. Sam Smith got it for a strong yet pretty typical Bond song. …..Okay?
Winner: Rock and race.
Of course, this particular award season was enshrouded in controversy. All the dialoguing on diversity these past few left many wondering how host Chris Rock would react to the problem of race at the Oscar; he did not disappoint. Rock spent the first ten minutes of the show giving  Hollywood a well-deserved slap on the wrist with a spate of gutpunch jibes and even some silence-inducing insults. Hilarious as it was insightful, Rock’s opener lampooned all sides of the conflict with expert precision and did not shy in the slightest from the issues many worried the Academy would keep tight-lipped on.
Loser: …..Rock and race.
Yes, those opening few minutes were amazing and packed a heckuva punch: that punch wasn’t supposed to last three hours. Rock went on to inject race into nearly every in-between gag and transition to the point where everyone in the Dolby Theatre got a little hot under collar. It was one-note and became tired and kind of clumsy (see one part of the ceremony where Rock awkwardly brought out the new “Academy Diversity Director” in an antic that left most shrugging) in a way that risked garbling the important message. A topic of essence? Yes, absolutely, but not one that needed to dominate such a good chunk of the evening after such a strong lead.
Winner: Fury Road on fire.
Let’s get back to the actual awards though: at last, blockbusters have busted out. No longer is talk of slam-bang action triumphs like Mad Max relegated to the summer as the fourth installment in particular led the pack this awards night, gobbling up over five trophies. Max’s big bite was most limited to the design and effects categories, yet it’s still the first time in eons a picture of its scale and explosive nature has permeated the show, demonstrating just what happens when a potential popcorn flick really swings for the fences. At this pace, the future does indeed belong to the Mad.
Surpriser: Supporting actor upset.
Turns out Rocky has little luck outside the ring: the tightest category of the night did not belong to Sly as many (including me) hoped it would. Despite all of his rugged pioneer posturing for The Revenant, the magnificent method-acting Tom Hardy (my close second choice) also lost out. Instead, the Academy selected the largely eclipsed Mark Rylance from Bridge of Spies. Is it out of touch or purely going off of talent instead of hype? You decide, I’m still reeling from this one.