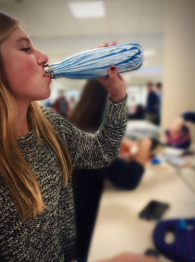 Iris, Ocean Blue, Midnight Black, Amethyst, Moonstone and Citrine.  These are not the colors of the Urban Outfitters nail polish collection.  No, these are S’well bottles: the latest trend to skirt the hallways of Staples High School.

Founded in 2010 by Sarah Kauss, S’well was “launched with the mission to rid the world of plastic bottles,” according to the company website.  In addition to its environmental practicality, Staples students have taken a liking to the aesthetically pleasing design and super cool insulation.

“[I] put ice in it at 9 p.m. one night and it still has ice in it by like 5 p.m. the next day,” Connor Mathewson ’16 said.  The thermos’ stainless steel and vacuum seal keep the bottle cold on the inside but room temperature on the sleek and stylish outside.  Staples may be unintentionally adopting this style from the hub of current trendiness itself: California.

“My dad bought them [in Los Angeles] for my sister and I a few months ago before they were big here,” Anna Daytz ’16 said.  “I didn’t see the big fad coming but I’d say the designs they have are really classy looking.”

Although students love the stylishness of S’well, there is a price to pay for elegance.  Available in nine ounce, 17 ounce or 25 ounce sizes, bottles can cost up to $45, which some students see as a steep price to pay.

“I practically could have gotten 15 iced coffees for that much money,” Daytz remarked.  That being said, Alyssa Hyman ’18, who owns the black matte and grapefruit linen designs, does not think the cost will stop more students from purchasing a bottle for themselves.

“They are becoming more and more popular every day,” Hyman said.  “They are sort of the new ‘thing.’”  In fact, some students believe that S’well bottles may even replace yesterday’s popular water bottles altogether.

“I guess you could say they’re replacing CamelBak, but that would be kind of a big deal,” Riley Thrush ’17 said.  “They’ll give CamelBak bottles a run for their money to say the least.”