The love begins at Toquet Hall 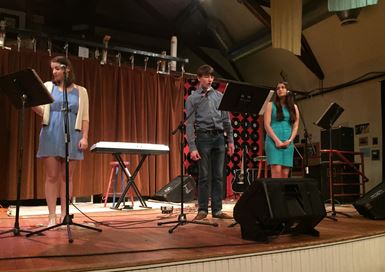 Caroline Didelot ’15, Colin McKechnie ’17 and Jordan Goodness ’16 all perform a number from “Where the Love Begins”

Toquet Hall was alive and electric Saturday night as several Staples performers came forth to lend their encouragement (and their talents) to a great local cause: the funding and production of “Where the Love Begins.”

“Where the Love Begins” is an upcoming musical crafted around commemorating the upbringing of Tess Meisel, a Westport student who passed away in a car accident nearly four years ago, framed through the perspective of her mother and the play’s writer, Suzanne Tanner, who attended the benefit itself.

Staples was well represented as numerous Players sang and even more students showed up to donate and support. The event itself was planned by several S.H.S. students as an effort to earn the community’s attention.
“We did the benefit in order to raise funds so that we could put the show up,” Sam Galvao ’16, an organizer for the benefit said. “It’s also about remembering our friend, Tess, as well and spreading the importance of love and family.”

Musicians including Jimmy Ray Stagg ’16, Jack Baylis ’15, and Aaron Samuels ’16, performed in between excerpts from the musical itself. Samuels himself explained his personal reasons for assisting.

“I’m just so proud to be in a community that has this level of talent, and I’m so happy that our performance was able to help contribute to the funding to such an incredible endeavor,” Samuels said.

Towards the end of the night, Tanner sincerely thanked the crowd and announced that it could be the start of several endeavors needed to fund the musical.x Overall, however, the benefit was a financial success.

“It went very, very well,” Jack Norman ’17, yet another student planner for the night, said. “And, in terms of fundraising, we did very well.”

With over $1200 grossed and ready for donation, everyone was satisfied and, after Tanner expressed her gratitude, the crowd roared.