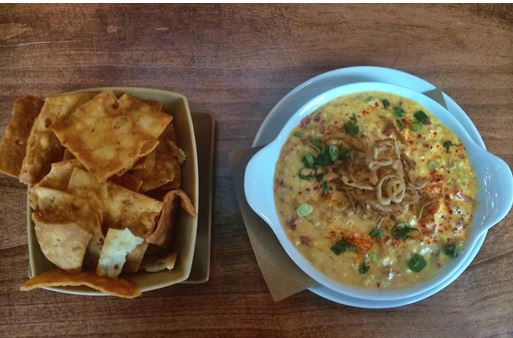 The crab and artichoke fondue was rich with smoke gouda, sriracha, and bacon. The dish cost $8.

My eyes had to readjust as I entered the old factory; sunlight was pouring in from towering windows, causing the steel pillars and copper light fixtures to shimmer.

I slid into a wooden booth and gazed up at the ceiling that soared two stories high. I listened as conversation and music intertwined, flooding the vast space.

I’m at Local, a hip restaurant in downtown Fairfield built in a previously abandoned factory. Instead of transforming the building, Local has embraced this industrial vibe, leaving visible pipes sprawling over exposed brick and cement floors

As I open the menu, I’m impressed by the variety. It’s eclectic, offering everything from hamburgers to lobster.

Intrigued, I ordered three dishes, including the Thai Popcorn chicken which promptly arrived first. The chicken itself was great- a sweet, tangy layer of crunch enveloping well-cooked chicken.

However, I could’ve done without the brussel sprout salad that lined the bottom of the dish. The texture of the crisp chicken atop the mushy salad was an unappetizing contrast.

As I waited for my next dish, I scanned the restaurant. Two college girls leaned against the wooden counter, snacking on the pork belly tacos. A father and son devoured beef sliders at a booth in the corner.

The atmosphere was relaxed and casual, though the square bar directly in middle of the room hinted at a livelier night scene.

Soon, the macaroni and cheese arrived.

The sauce, consisting of three different cheeses, created a rich, delicious blend. A layer of crumbs sprinkled across the top added much-needed texture to the creamy pasta dish.

The only downside was that the that bits of bacon scattered throughout were unnecessary. The flavors of the dish were already so strong that an additional salty touch was overwhelming. While the bacon was a fumble, it was all-in-all a warm, yummy meal.

My final order, a warm crab and artichoke fondue, was similarly rich and cheesy, served with chips. It also had pieces of bacon, but this time they complimented the crispy chips nicely.

Overall, I was happy with the food, but not thrilled. But then again Local isn’t just about the food– it’s about the laidback experience and the unique decor. It’s moderately priced, offering small and large portions of many dishes, and is a great place to grab lunch or dinner with friends.

Local is at its best when it doesn’t over-complicate its dishes, serving interesting food in a stylish location.