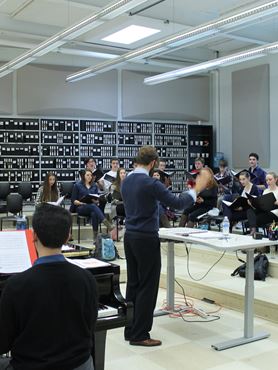 SAN FRANCISCO BOUND Orphenians prepare for their upcoming concert on Feb. 23, which will raise funds for their chance to perform in San Francisco with the famous men’s choir, Chanticleer.

Everyone knows that the Staples Orphenians shine, but on Monday, Feb. 23 the stage will ignite with not only Staples stars, but also Broadway stars, in a benefit concert directed by Staples alum and Broadway’s “Newsies” cast member, Adam Kaplan ’08.

All proceeds will go towards funding the Orphenians’ trip to perform with Chanticleer, a famous professional men’s choir, in San Francisco. The idea for this concert was crafted by Jeff Kaplan, Adam Kaplan’s father.

“My dad called me up and said something along the lines of, ‘I did something bad,’” the younger Kaplan said.

“All jokes aside, I’m so happy to be doing this for a group that was so special to me in high school.”
Orphenians members are excited to meet and share their performance with people they’d before only seen on a Broadway stage, including actress Kara Lindsay from “Wicked,” actor Robin de Jesus, from “Wicked,” “In the Heights” and “La Cage aux Follies,” and others.

From a Broadway performer’s perspective, Kaplan said it will be challenging for a group of busy professional actors to travel out to Connecticut on their day off.

Yet, his friends are motivated to spend their time performing with such an impressively high-level group of young musician, and the students are equally spurred on by their admiration for the professionals.

“We look up to all these people and it means so much that they are doing this to help us out,” Colin McKechnie ’17, an Orphenians member since his freshman year, said.

This excitement is reciprocated by Kaplan and his colleagues.

“I loved when alumni would come in and talk to us about their experiences in the professional world, so this feels full circle,” Kaplan said.

Choir director Luke Rosenberg believes the concert will attract a large audience with its relaxed atmosphere.

He is confident “the audience is gonna love it. It’s gonna be a lot of fun, it’s gonna be very intimate, kind of just like causal performance, almost cabaret-style.”

Many Orphenians agree, including Ian Goodman ’15, a three-year member, and Claffey, who predict the concert will be a hit, especially with the strong support for the arts in the community.
Ticket sales have already hinted at the large expected turnout.
“Ro [Rosenberg] gave us each ten tickets to sell and as he handed them out, a boy [Goodman] made a joke that he would never be able to sell all ten,” McKechnie said.
“He actually ended up selling all ten in less than a week and then he came back the next week asking for more tickets to sell,” he continued.

To ensure this success, preparation for the benefit and the San Francisco concert has included many hours of rehearsal and hard work.The Orphenians have spent two hours a week at regular in-school rehearsal along with section practices outside of school and a few extra rehearsals, Julia Kempner ’16, a two–year member, said.
“We’re incredibly lucky to come from a town with such a strong arts program.” Kaplan said. “I often forget that not everyone went to Staples.”