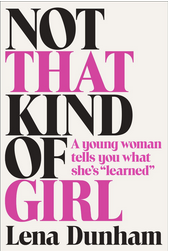 Lena Dunham, the star and creator of HBO’s hit show “Girls,” opens up the first chapter of her memoir, “Not That Kind of Girl,” in typically blunt fashion: “When I was nine, I wrote a vow of celibacy on a piece of paper and ate it.”  With that, she sets the scene for an anthology of hilarious stories and lessons she has learned on the way from an awkward and slightly chubby teenager, to one of the most successful faces in television.

In chapters with eclectic titles such as “Who Moved My Uterus?” and “Is This Even Real?,” Dunham’s entertaining voice, which is a mix of Tavi Gevinson and Amy Poehler, will keep you amused and entertained until the very end. It’s the kind of book you want to read cover to cover, including the acknowledgments, in one sitting.

On “Girls”, Dunham plays the character Hannah Horvath.  After reading her memoir, it’s clear that the character is modeled closely on her own life.  Both Dunham and her alter ego are writers living in Brooklyn, whose parents cut them off from financial help, and are now ‘navigating their 20s’ through a sea of boyfriends, unpaid internships and the occasional experiment with ecstasy.  But their most predominant feature might be their ever-present selfishness.

When Hannah gets a coveted position at GQ Magazine, she sulks and complains for awhile in the presence of her new boss, until she quits because she’s supposed to be a “real writer” and this isn’t the kind of jobs “real writers” do. Hannah is unable to appreciate her good fortune, and is only able to complain about what she finds lacking in the position.

Which brings me to the major problem with “Not That Kind of Girl.”  Like the television show, Lena is unable to discuss anything that doesn’t directly affect her, and is a little insensitive while doing it. In one account, she describes her experience with an AIDS patient. “I still have a lot of guilt for screaming at Jimmy… especially since he died [of AIDS] a few weeks later. The summer after sophomore year of college, I became convinced I, too, would die of AIDS…  …By the end of summer I was officially “living with AIDS”…Spoiler alert: I was fine.”

This anecdote perfectly captures the problem that both Lena Dunham and Hannah Horvath have- they have so much privilege they don’t even realize it. It’s privilege that lets her get away with being self-centered, having a lack of empathy for AIDS patients or anything outside a 10-mile radius of her $4.8 million Brooklyn apartment.

Many of her anecdotes about sex and love and diets felt like rejected storylines for “Girls” episodes. She had 265 pages and $3.7 million from Random House to convey a more meaningful message than “boys are mean and I’ve had bad sex before,” which has already been shown too many times in “Girls.” As one of the most powerful faces in the media, I was expecting Dunham to demonstrate some sort of universal epiphany about racism or sexism, or something to inspire her readers.

This book was a fun, quick read but I think I set my expectations too high. In the future, I think Lena Dunham should stick to those kinds of “Girls”.