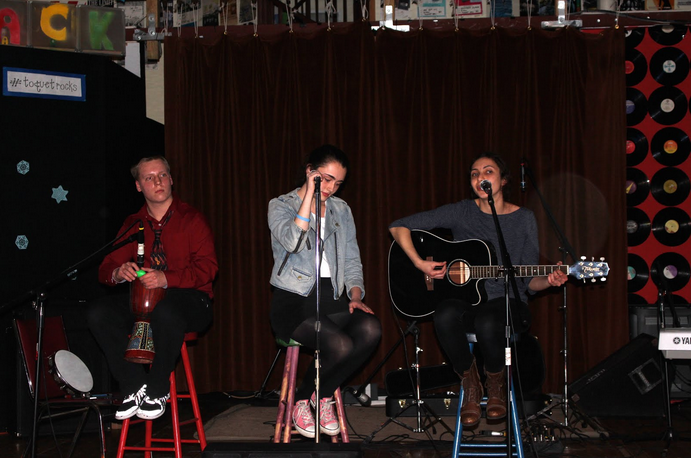 On Friday night, Dec. 10, talented musicians performed at Toquet Hall featuring a variety of music genres and popular songs, and on top of all that, it was for a good cause.

The Staples’ Nerdfighters Club ran the event to raise money and awareness for the Narcolepsy Network, presenting local bands Jillian’s Therapist and C4S as well as other groups including Villains in Love and popular pop rock band, Broadcast Hearts.

The club, according to member Douglas Raigosa ’16, “fights to decrease ‘world suck’” or “injustice” in the “community, nation, and world.”

Raigosa said the club’s purpose is to “donate funds to charities and launch projects to help various causes.”

Rock band Jillian’s Therapist, previously known as One Takes All, kicked off the night with upbeat songs like “Aeroplane” by the Red Hot Chili Peppers to get the audience moving.

Staples student and lead vocalist, Max Rothstein ’17 said, “We love playing ‘Aeroplane’ because it’s just an awesome grooving song and we’ve been playing it for years.”

Rothstein was joined on stage by his fellow band members who attend different local schools, including Julian Dinowitz, Reine Lederer, Will Rosenthal, and Drew Sennett.

Returning alternative band, C4S, took on a different approach to their set list by featuring all acoustic covers including crowd favorites such as “Yellow” by Coldplay, “Riptide” by Vance Joy, “Cigarette Daydreams” by Cage the Elephant, and “All Too Well” by Taylor Swift.

Audience members noticed C4S was short a few members as Staples students Kaila Finn ’16 and Justin Cheng ’16 were off preparing for the SATs. Three bandmates, Jen Gouchoe ’16, Ellie Aronson ’16, and a junior from Redding, Matt Svenson were there to perform.

Gouchoe joked to the audience, “We are C4S. I guess we are more like C3S tonight.”

C4S superfan Will Andrews ’16 noticed their set list was different without the other two band members, “They were missing their guitar player and one of their singers so they couldn’t do much of the alternative stuff they normally do, but I think that really allowed their talent as acoustic musicians to show.”

The audience swayed and sang along to their catchy covers, and a surprise was in store for their eager fans. C4S played a Christmas song.

“They did Feliz Navidad which was pretty dank,” Andrews said. “It got me in the Christmas spirit.”

Aliza Gross ’16 also expressed her liking of the impromptu holiday song, “I thought it was a cool and spunky touch.”

With the evening being received with enthusiasm from many fans, they should expect more to come from both bands.