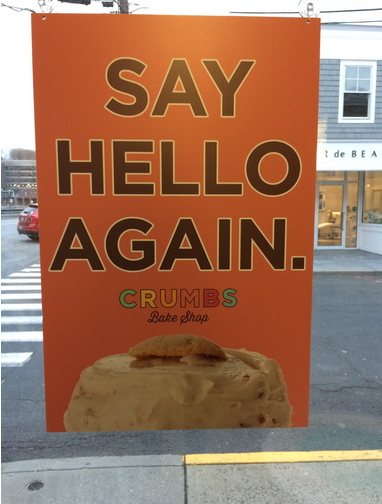 Crumbs celebrates it's return with lots of new goodies

Crumbs has finally delved into the gluten free world, returning to the Westport dessert scene after a roughly four-month hiatus due to bankruptcy.

In early July 2014, all Crumbs locations closed after the company went bankrupt. However, after being purchased by the owner of the Dippin Dots company, Crumbs Westport, along with many other Crumbs locations, reopened in early November.

I was very excited to hear that Crumbs would be reopening, specifically because of its new menu. Under Crumbs’ previous management, only one gluten-free option was offered—and only the Jewish holiday of passover during Passover.

When I arrived mid-Saturday afternoon, Crumbs was abuzz with happy customers. After being open for about three weeks, gluten-free options were finally in stock. Currently, the only gluten-free options are red velvet, cookies & cream and devil’s food cupcakes, along with a chocolate chip brownie.

You are also able to purchase packages of Dippin Dots from the cooler in the corner of the store. It’s easy to miss the fact that Dippin Dots are sold, however, because of the minimal marketing and location of the cooler. Some of the Dippin Dots flavors are gluten free, and they are well packaged in nice portions.