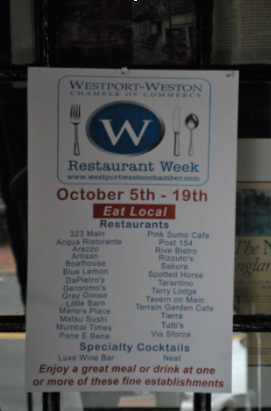 A
cqua’s crispy chicken Milanese, the Spotted Horse’s Maine mussels and Pink Sumo’s Sashimi creations are just a taste of the variety of dishes featured this year during Westport’s Restaurant Week, Sept. 29 to Oct. 12.
Produced by the Westport-Weston Chamber of Commerce, Restaurant Week allows Westport residents to try cuisine from different restaurants throughout town by offering specialized menus and deals.
Oftentimes, the two-week long celebration is a chance for restaurants to create a unique, interesting menu with seasonal ingredients.
Tarry Lodge’s Service Director, Melinda Skiham, said that Restaurant Week is “giving people a taste of something that normally wouldn’t be on their radar,” adding that Tarry Lodge will probably serve a lunch of one of their thin-crust pizzas and distinguishing salads.
Restaurant Week isn’t just for adults; Staples students are excited to hit Westport’s food scene as well, especially because teens know all too well the value of these restaurants’ bargains. Many Staples students noted being most excited for Matsu.
Katie Lee Sullivan ’16 raved, “Matsu is a great restaurant because it has such a good variety of Japanese food that can appeal to most everyone.”
Another fan, Alex Suppan ’16, said, “I love Matsu! It’s a fantastic sushi restaurant, but when I’m not in the mood it still has so many other options. One of my favorites is their hibachi chicken!”
Rowing mates Mary McGee ’17 and Emily MacDonald ’16 explained that the rowing team loves Matsu.
They said, “Our entire diet is sushi. After rowing we only eat at Matsu.”
While Matsu has been a part of Restaurant Week for years, there are also new, trendy dining options like Spotted Horse and The Red Hen at The Westport Inn. These restaurants’ menus are mostly featuring revamped classic dishes like meatloaf and roast chicken deconstructed and doctored-up.
There are other classics that have participated in Restaurant Week for some time including DaPietro’s, Tavern on Main, Rizzuto’s and Mumbai Times. Staples student Vig Namasivyam ’16 is looking forward to eating at Mumbai Times, one of the Indian eateries in town.
Namasivyam said, “While the food isn’t of the highest quality, Mumbai Times still provides an authentic, homey environment that makes this place worth eating at. I would be happy to go there during Restaurant Week.”
Rizzuto’s also often still gets a lot of student support during Restaurant Week, like Ellis Laifer ’15 who noted “Rizzutos’ exquisite menu.”
These classic restaurants still have a place on the food scene, like Acqua, who has participated in Restaurant Week for most of it’s years since opening in 1997 It’s still gleaning new customers.
Restaurant manager Lelo Arslanagic summarized what many are excited for saying, “It brings people in. You get new customers, great promotions, and new faces.”