Slice of Saugatuck serves up success 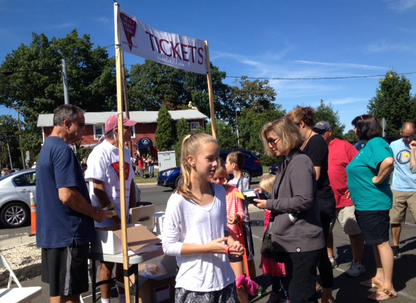 Last Sunday, over 20 restaurants, eight bands and hundreds of Westporters came together on a sunny afternoon for one mammoth gathering.

The annual Slice of Saugatuck Festival, now in its third year, looped from Riverside Avenue to Railroad Place and allowed for patrons to sample food from an array of local restaurants, including but not limited to, Westport Chinese Takeout, Julian’s Brick Oven Pizza, Viva Zapata and newcomer Saugatuck Sweets.

“I’ve never really gotten  to try all these places’ food so I would say this really opened up Saugatuck for me,” Casey Floyd ’16 said.

“I’ve had everything from Thai, clam chowder and fish taco,” Kate Andrews, another patron, said. “It’s all been very well done.”

But the festival was not just limited to food. Numerous Westport bands including but  not limited to C4S, The Foresters and Fighting Static were scattered throughout the area and rocked their venues. The festival ended up being a perfect stage for them.

“Between the weather and the music, I’m just having an awesome time,” Aliza Gross ’16, an attendee and a devoted fan of C4S, said.

Aside from all of the sampling and dining, other activities were offered. Down Under, a sports store, offered kayaking; 99 Bottles, a liquor store, held a wine tasting session; and local martial arts studio World Champ Tae Kwon Do even demonstrated different self-defense tricks.

According to organizer Joan Scortamalgia, the event, which brought in over three hundred people at her ticket stand alone, was an overall success.

“This year, community really came together,” she said. “And the food was better than ever!”