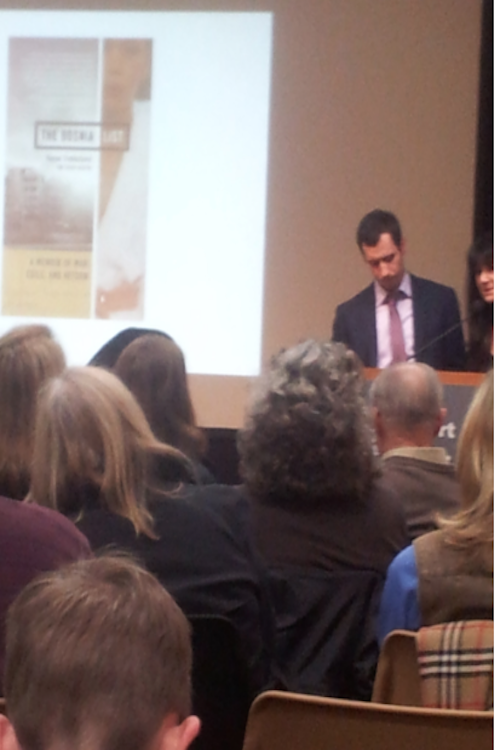 Kenan Trebincevic speaks about his memoir at the Westport Public Library

From the Bosnian Genocide to Staples High School, Kenan Trebincevic spoke about his eventful journey and highly praised book “The Bosnia List” on Saturday, March 29 at the Westport Public Library.

Survivor of the Bosnian Genocide, Trebincevic outlines his recollection of war, exile and return in his powerful memoir. It chronicles both his escape from Bosnia and his emotional journey back to his homeland to grant his father’s wish of once returning.

He began the event by giving a quick blurb about the book, then read two chapters about his arrival in Westport followed by a Q and A afterwards.

In the two chapters Trebincevic read, he depicts his new lifestyle in 1992 Westport.

“I was afraid of the big, rich American kids who wore baseball caps to school every day,” he read.

He loved soccer and art, but more than anything, he strove to get good grades. Many of his peers were rewarded with money, gifts, and tangibles for getting good grades, but that was never the case with him. He was propelled by his future. He knew how fortunate he was to even be alive and cherished his education, simply receiving praise from his parents as a reward for his A’s.

However, a few years after moving to Westport, he experienced tragedy after tragedy. In a quick span, his father went into a severe coma, his mother passed away from breast cancer, his grandmother passed away after hearing the news of his mother, and his beloved dog died a week later.

His father eventually recovered  and said, “It seemed as though just as we were getting dad back, we were losing mom.”

The next speaker at the Westport Public Library is emmy-award winning skating commentator and Olympic gold medalist Dick Button as he showcases his book “Push Dick’s Button” on Sunday, April 6 at from 2 to 3 p.m.