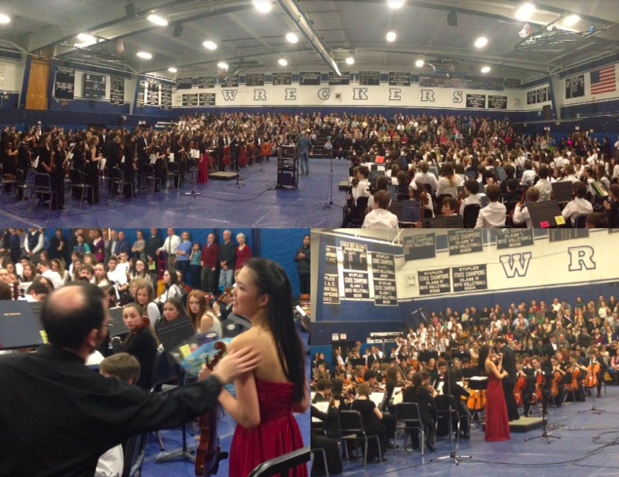 A crowd of hundreds piled into the Staples Gymnasium on Thursday March 19 at 7:30pm to attend the 2014 Westport Orchestra Festival. The event combined both the melodious sounds of the 7th and 8th grade Orchestras from Bedford and Coleytown, and the incredible talent of the Staples Symphonic Orchestra and Sophomore Strings Orchestra.

David Wiener introduced the festival with an anecdote about his experience in discovering his love of orchestra, as he is retiring from his position as Music Supervisor of Westport Public Schools at the end of the 2014 school year. He quoted Plato, who said, “Music gives a soul to the universe, wings to the mind, flight to the imagination and life to everything,” perfectly capturing the way in which the orchestras filled the gym with music on Thursday night.

All the orchestras were animatedly conducted by Jonathan Yates, the Music Director of the Norwalk Symphony Orchestra. “My message to all young musicians is to just enjoy it. Music is a love you’ll have your entire life. It doesn’t have to be something you do professionally, it’s something you will always have for the rest of your life,” Yates said.

Both 7th Grade Orchestras gracefully began the night with the exciting “Twilight Ceremonial”, a piece by William Hofeldt, followed by “Toreador Song,” composed by Bizet and arranged by Frost: a piece so lively that it had the whole audience bobbing their heads and swaying to the up-best rhythm.

Then, both 8th Grade Orchestras played Overture to “Lucio Silla”, composed by Mozart arranged by Dackow, intricately from start to finish, and closed with “Blue Rhythmico” composed by Kirt Mosier, a piece with raging intensity, performed with concentrated emotion.

As the middle school portion of the concert came to a close, the exceptional, award winning violinist, Katie Zhou ’14, backed up by the talented Symphonic Orchestra, played the challenging “Carmen Fantasy, Op. 25” composed by Bizet-Sarasate. Jaws were dropping with each beautiful note Katie played in her solo. “It was such a honor to show all I have learned in the Westport music system,” said Zhou. “To be able to play in front of such a big audience of Westporters was really a great experience.”

After the sweet sounds of “Carmen Fantasy Op. 2” erupted into cheers and claps, the Symphonic Orchestra and Sophomore Strings became one, and played “Danzon No. 2” composed by Arturo Marquez, a sweet piece to end the concert.

Hannah Simons ’16, member of both orchestras, was overjoyed with the festival. “Getting to hear the 7th and 8th graders play was great, and Katie’s solo was mind blowing.” Simons said. “I’m so proud of all the orchestras and glad that I could be a part of the festival.”