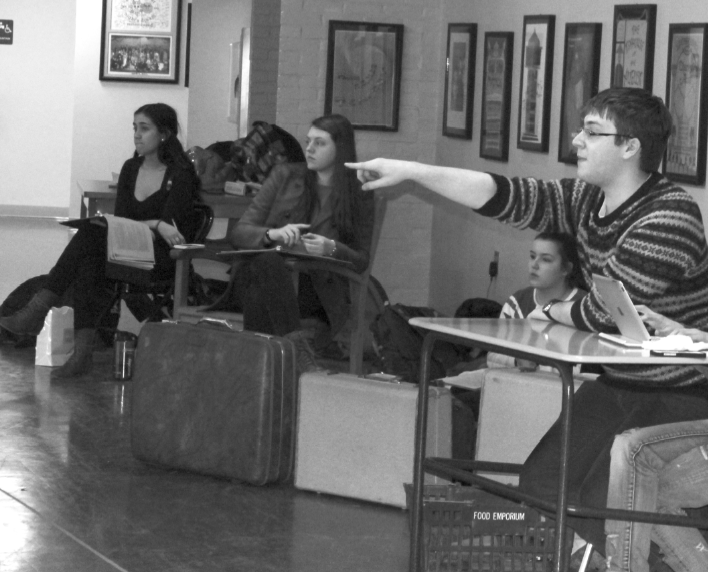 Practice begins outside the auditorium. The environment is calm and casual as kids let their heavy backpacks collapse onto the ground and pull out their crinkled coffee-stained scripts. The buzz of conversation and laughter flood the space, only to be disrupted by a single commanding voice. The small talk dwindles away as the actors turn their attention to the person in charge— the director.

Only, in this Players’ production, the director is barely older, if not the same age, as the actors. Nathan Francis ’14, who has been involved with Players since he was just a freshman, is directing this season’s studio play, “Don’t Drink the Water.”

“Don’t Drink the Water,” by Woody Allen, chronicles a family who is accused of espionage after taking harmless tourist photos. They end up stuck in the American Embassy in a made-up country behind the Iron Curtain, and the play follows them and all the crazy people they meet as they try to escape.

Francis says some examples of these people include “a nun doing magic tricks, a communist policeman with anger issues, and a psychotic chef who is very proud of her cooking.”

Francis also describes the play as “crazy and wild with a lot of energy and action.” Cast member, Justin Chen ’16, adds that it features a lot of “very zany, slapstick style of humor with a lot of witty, fast paced dialog.”

Only one or two studio plays are directed by a student each year. To be eligible, you have to take the directing class either junior or senior year. Francis raved about the class, talking about how “you learn how to manage your actors, and you become a better teacher and leader in the process.”

Rachel Beck ’15, who plays a member of the family, said the atmosphere is much more “low-key” than when plays are directed by an adult.

When asked if it’s hard to balance being a student director, Francis doesn’t hesitate to answer.

“It’s 100% percent difficult. While it would be easy just to laugh and joke with my cast the entire time, I also need to be the one to be on task and really work everyone around me so they can be the best they can be,” he said.

He chuckles while saying, “I’m definitely more of a stickler for the rules now.”

Despite the obstacles, Francis’s passion for directing is evident as he discusses how it’s different from acting. As he begins to speak, he leans forward in his chair and his words start tumbling out quickly.

“I really like the creation and being able to develop the world as opposed to just contributing,” Francis said excitedly, “I’m manipulating, and designing, and creating.”

A slight  smile spreads across his face as he adds, “I like being able to kind of call the shots and make my own interpretations.”

With Francis behind the scenes, “Don’t Drink the Water” is sure to be a lively comedy that will be coming to Toquet Hall on February 28st, March 1st, and March 2nd.

Renée Weisz ’17, a member of the cast, urges everyone to see it “to support Nathan and check out a Woody Allen script that is quite hilarious.