Players learn puppeteering from the pros 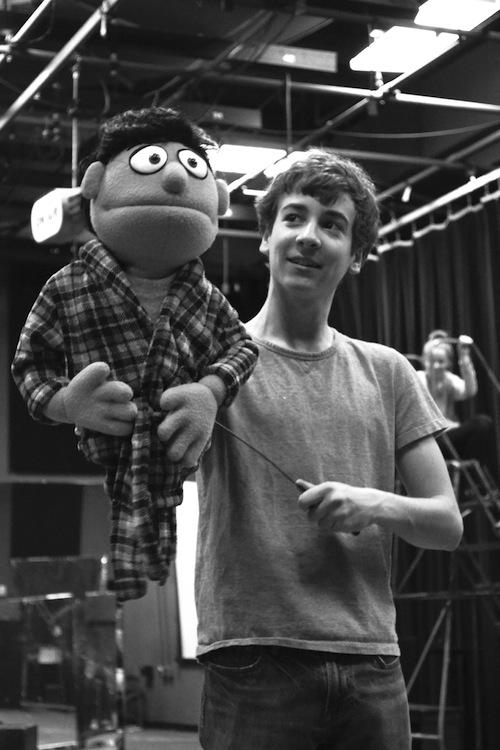 Will Haskell ’14, playing the character Princeton in the Staples’ production, practices his puppeteering with professional puppeteers Pam Arciero and Rick Lyon.

In the past 55 years of Staples Players productions, Staples students have transformed into characters onstage, but no one has seen a transformation quite like this.

With vibrantly colored skin, gigantic eyes, perfectly round noses, and some wacky hairdos, the Staples Players will appear not only as themselves but also in puppet form in the spring production, “Avenue Q.”

As assistant director Vignesh Namasivayam ’16 explained, few of the Players have worked with puppets in the past and therefore found working with the puppets initially to be a struggle.

“It’s hard to figure out what exactly the puppeteer is doing to convey so much through their puppet,” Emily Ressler ’14, who will be playing Kate Monster in the show, said.

Adding learning to use a puppet on top of the lines, lyrics, and choreography the Players have to memorize, provides a challenge. Ressler described acting with a puppet while singing and dancing as “the ultimate multi-tasking.”

However, the Players aim to produce the same high caliber performance they’re known for, puppets or not. So, director David Roth arranged to bring in some expertise.

Pam Arciero, a puppeteer who played Oscar the Grouch’s girlfriend, Grundgetta, on Sesame Street, as well as Rick Lyon, who created the puppets for and acted in the original Broadway production of “Avenue Q,” came in to work with the “Avenue Q” cast.

“Learning to puppeteer competently is just as hard as learning to juggle or tap dance or play football – it requires the acquisition of new skills and new disciplines,” Lyon said in an email interview.

Although the Players’ time is limited with the special guests, a little goes a long way. “Even after just one workshop, we’ve learned so many tricks to show some classic emotions, as well as going over some easily-overlooked, yet crucial basics, like remembering to make your puppet breathe,” Ressler said.

When asked the key to puppeteering, Lyon answered in one word, “believability.”

“From talking to walking to breathing to sneezing, we are trying to convince audiences that the puppet is a living being that is interacting and making real choices on stage,” Will Haskell ’14, who will be playing the character Princeton, said.

What is the key to successful puppetry?

Successful puppetry involves learning the physical movement, the emotional life of the puppet, and the ability to “channel” the character. Your belief in the character and puppet is what makes the audience believe it is alive. If you don’t believe in its life, then it is just a dolly. Puppetry is different from acting in that you have to do everything an actor does with his body, face, voice and mind, and perform all of that from your elbow to your hand. What comes naturally, like walking or sneezing, has to be analyzed and created with just a limited part of your body, your arm.

Can you tell me about being on Sesame Street as Grundgetta?

Grundgetta had been performed for one season by another puppeteer, Brian Meehl, and I took over the character from him. At first, she was more like what Brian might have done, but she became all mine. She is a grouch, with a good heart. She is devoted to Oscar, but don’t ever tell him that. They have never gotten married because grouches hate to be happy. She is very independent, strong willed and has a wild sense of humor. It’s hard not to do a character for so long and not have them live somewhere in your heart.