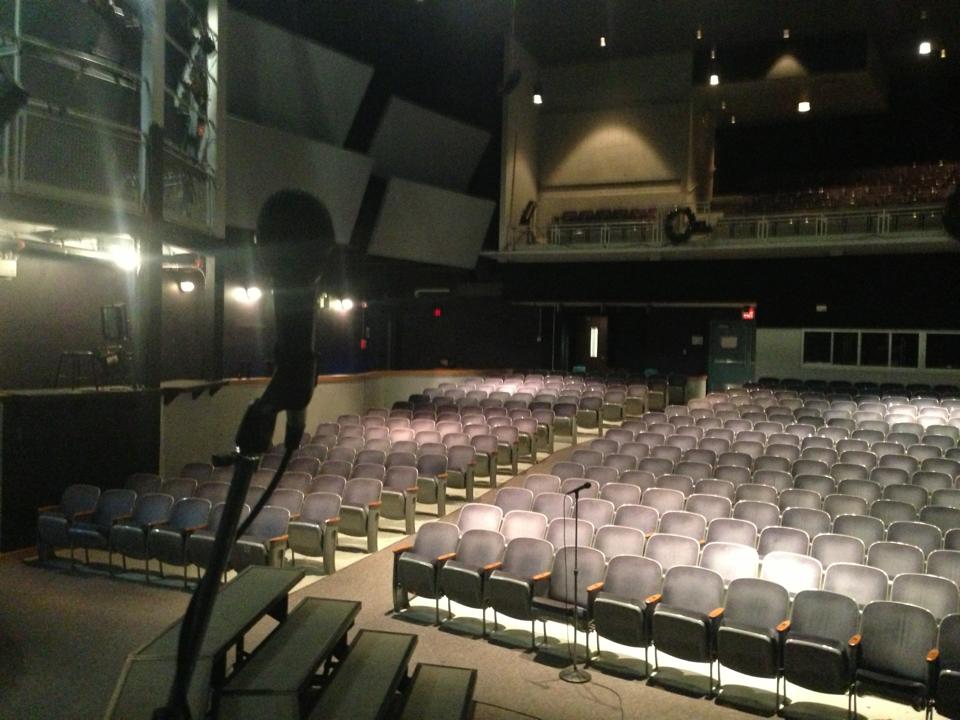 During the hiatus, the auditorium stage remains empty of actors rehearsing

Most days after school, members of Staples Players congregate in the theater hallway, scrambling to change their outfits and run their lines. The flurry of activity continues long into the afternoon, leaving thespians with little time to do homework or hang out with friends. But in the sliver of time between the final bows of the fall main-stage production and the start of auditions for the spring show, Players find themselves with more time to be productive, have fun, or just take it easy.

Many performers are using the break to prepare for the January auditions for the upcoming spring production, “Avenue Q.”

Claire Smith ’15 said she picks her audition song far in advance so she can practice it with her voice teacher and get comfortable with it. She added that if a show requires a lot of dancing, she uses this time to squeeze in a few extra dance classes as well.

“It’s all about being really prepared, because when you feel prepared you are your most confident,” said Smith. “You show [the directors] your best self, which is what they want to see.”

Rachel Beck ’15 is also taking advantage of the break to work on her audition for “Avenue Q.”

“I meet with a voice teacher, so I am preparing a song,” said Beck. “It has to be in a character voice so I’m working on that and just creating the character as a whole.”

While the actors are getting a head start on their audition pieces, members of the crew are also hard at work.

Assistant Director Isabel Perry ’15 says she likes to do a fair amount of research before a show begins.

“I’ve been watching clips from the off-Broadway version [of “Avenue Q”.] and reading the script to get a better idea of the characters,” said Perry. “I’ve also been researching puppeteering and puppet voices because that’s so foreign to me. Surprisingly, ‘Sesame Street’ is a good source of information because so many of the characters are based off of ‘Sesame Street’ characters.”

Members of Players say that the time between shows gives them more freedom to do activities that are hard to fit into their busy rehearsal schedules.

“I have more time on my hands, so I make more time for my schoolwork, exercise, and hanging out with friends,” said Smith. “I get to treat myself and give more time to other important aspects of my life.”

Beck, who takes dance classes during the year, is also able to spend more time dancing when she is not in a show.

“Towards the end, in hell and tech week, we would have rehearsal until 6:00, 7:00, or even 9:00 p.m.,” said Beck. “That took up a lot of time, so usually there wasn’t much time for anything else except homework…. [But] December is a pretty calm month for Players.”

While students can spend their time off a variety of ways, Perry advises them to make smart decisions.

“People should definitely take advantage of the break and rest up!” said Perry. “Anyone who plans to audition should definitely find a song and become familiar with the show. Along with that, though, definitely don’t hurt your voices. Stay safe!”

Although Players vacation isn’t entirely relaxing, it is a great time to prepare for the strenuous weeks of showbiz that lie ahead.