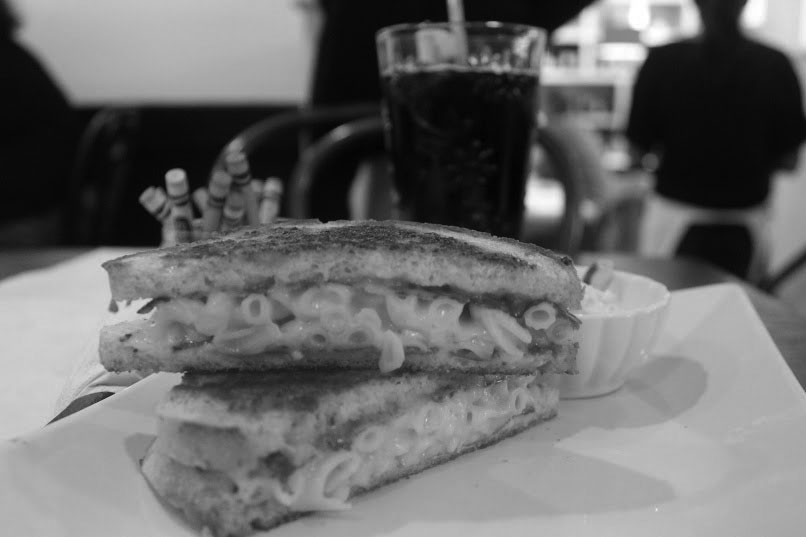 As in, never-want-to-leave-my-bed and where-are-my-fuzzy-socks cold. It’s weather that makes people crave comfort food, the kind that puffs butter-scented steam and slides off forks and attracts jealous stares from everyone nearby.

The Grilled Cheese Eatery in Fairfield may have perfected this meal.

How unbelievably good does that sound?

Maggie Fiolek ’15 thought it sounded delicious too. She tried it, and now she knows for sure.

“I loved it,” Fiolek said. “I would order the same thing again.”

Even if people didn’t want that particular sandwich, they could choose from nine other specialties or combine any of five breads, eight sauces, and 14 cheeses. Asiago melts into mozzarella between crispy country white and smoked Gouda gushes over the edge of toasted sourdough.

“The bread was toasted perfectly,” Swotes said. “It was literally unreal.”

Swotes said next time she would get out of her “comfort zone” and try something new. Michelle Gurevich ’14—who has grilled cheese as her desktop background—also wants to try one of the more unusual sandwiches.

“If I took the time to go somewhere like the Grilled Cheese Eatery, I would definitely get the craziest thing on the menu,” Gurevich said.

It’s up in the air, but that might be the Trophy: Gruyere, short ribs, truffle oil, caramelized onions, and mushrooms on sourdough.

But the Eatery is not the only restaurant that has invented some pretty creative variations on what some may have thought was a basic food.

About three miles away, another Fairfield restaurant, MacDaddy’s, has a menu with no less than 25 different versions of mac and cheese, including the “Mac Lobster,” made with fresh Maine lobster, lemon zest, and mozzarella.

Tipped off to the spot by his brother, Joe Zec ’15 picked mac and cheese with 12-hour roasted pulled pork, blue cheese and barbecue sauce. Like Fiolek, he doesn’t want to switch things up.

“I would probably get the pulled pork again,” Zec said.

Served in small saucepans, these macaroni dishes are nothing like a box of Annie’s. Just look at most popular order: the “mac buffalo chicken” is made with fried chicken, homemade buffalo sauce, cheddar and blue cheese.

But when it’s sub-freezing outdoors, no one wants celery and carrots. Winter is the time to find that heavenly cheesy meal oozing heat and flavor and eat every bite.

What that buttery food lacks in nutrition, it may make up for in emotional benefits. Scientific studies show comfort foods—including mac and cheese—actually counter stress and loneliness.

So really, a visit to the Eatery or MacDaddy’s is a matter of personal well-being.