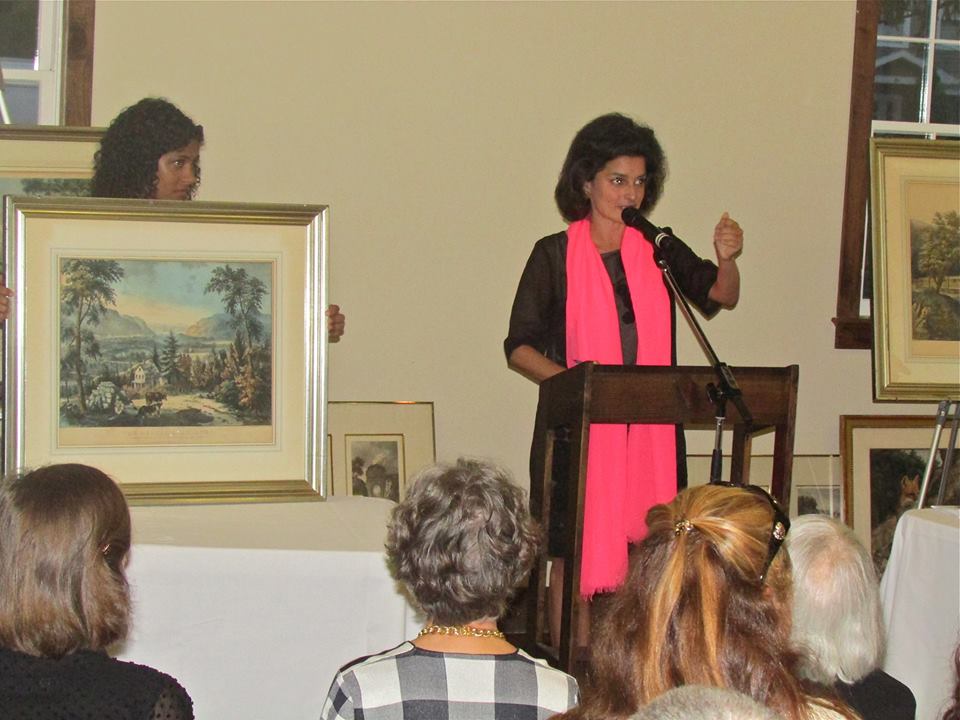 The auctioneer, Jennifer Wright, encourages people to bid for rare prints worth up to $2,000.

Prints lined the walls- paintings portraying oceans whipping sailor’s boats, foxes slipping through the murky woods, and horses stampeding across a dark coastline. The crowd of 100 people flooded into the room, strolling from one side to the other, writing their bids down on a paper next to the painting. Intrigued, they looked at the prints displayed in the front of the room- the most valuable ones that were reserved for the live auction.

This was the scene at the Westport Country Playhouse during the art auction for the Westport Historical Society on Saturday. The 19th century prints were donated by the Bank of New York Mellon Wealth.

“It was a huge act of generosity,” said Susan Gold, Executive Director of the Westport Historical Society.

Gold added that the profits would go to running the general operations for the Historical Society, as well as the plethora of educational programs they run throughout the year. Many of these programs appeal to Staples kids, such as kayaking around Old Mill Pond, craft shows to display local artisans, and countless historical tours around the town. As well as the its many interesting programs, the Historical Society strives to involve Staples students whenever possible. Before the room was filled with adults, many of whom were Staples parents, the Service League of Boys, a group of Staples boys, helped with the set up of the event.

Since event was for charity, guests didn’t hesitate to scribble their names next to a bid. The crowd of Westport residents, all clad in dark colored cocktail dresses and casual suits, created a hum of light conversation about how much they loved the unique prints.

“They’re all a part of history so I think everyone can relate to them. They’re great for people to design their own space around,” said Danise Talbot, an attendee.

Following the silent auction came the live auction. Everyone took a seat in the folded chairs that were set up in middle of the room, and clutched their numbered white paddle tight in their hands.

The auctioneer that took charge of the live auction was Jennifer Wright. Wright currently works as the head of the 19th century drawing department at Christie’s, on of the world’s largest auction houses. She volunteers for charity auctions in addition to her normal work.

As she stepped up to the podium in the center of the room, she was calm and relaxed. She was humorous as she motioned towards the painting and jokingly encouraged everyone to make a bid. While the prints in the silent auction spanned a range of $75-$300, these prints were rarer and cost up to $2,000.

A few attendees with white paddles tentatively rose from the mass of people, and from there the auction sped up until all but one of the prints were sold.

With all but 5 of the 42 prints being sold overall, the night was altogether a success.

“It’s hard to predict which auctions will be successful- it all depends on how committed people are to the cause,” Wright said.