Insidious 2: A Sequel More Possessing Than The First 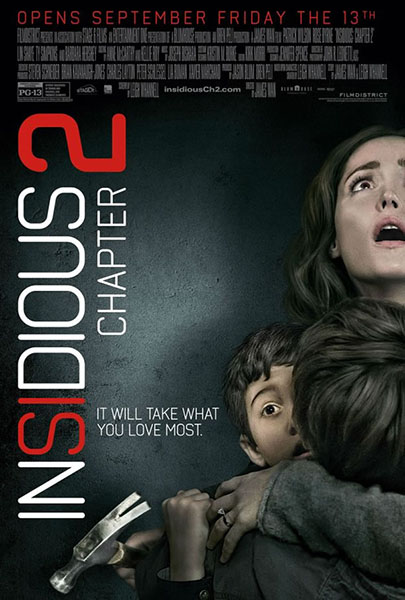 “Insidious 2”, directed by James Wan, blew away all my expectations after having seen the first Insidious. The first “Insidious” was slow and boring and, except for a jump here and there, just not that scary.

Wife Renai (Rose Bryne) was a pathetic creature. Husband Josh (Patrick Wilson) was kind of a jerk, and the only source of excitement was stuck in a coma.

Quick recap of the storyline: The son’s (Ty Simpkins) spirit is captured by a creepy, evil red guy in a place called The Further. Josh goes into The Further to save his son, which he does, but his body ends up being possessed by the evil spirit that followed him in his childhood. Yay! Fun cliffhanger!

In “Insidious 2”, Josh’s body is still taken over by that same evil witch spirit, ew, while his own spirit is stuck in The Further. No one even realizes, which I truly don’t understand. For one, he’s acting loco with some major crazy eyes.

And two, the picture of the witch at the end of the first “Insidious”! Everyone saw it. Elise (Lin Shaye), the woman helping to save their son, was even killed over it. Everyone knew the witch wanted Josh’s body and that the witch only showed up on film. I feel like it would have been pretty obvious leap to suspect Josh’s spirit was not there.

Also there’s also some extremely gross teeth pulling going on as he ages super fast because the healthy body can’t handle the dead spirit. Ugh, I’m really not a fan of the bloody teeth, but it certainly ups the major creep factor this movie has going on.

While Josh’s body has the crazy eyes going on, spirit Josh gets to watch as his family becomes more and more unstable. So, fun times.

I love that Wan made “Insidious 2” so much more exciting. So much more happened and (most of) the characters were actually proactive. Plus, you found out some information that explained creepy events in the first Insidious.

I just would have loved more from Josh and Renai. In the first and second they’re boring and not helpful. The real stars of “Insidious” 1 & 2 are the side characters. Even the two sons with their combined lines of 10 were more exciting.

“Insidious 2” was most definitely creeptastic. I was actually jumping out of my seat and shrieking at times, which is quite unusual for me. Even if you didn’t like the first, like me, you’ll love “Insidious 2”.