The Drama Within The Drama 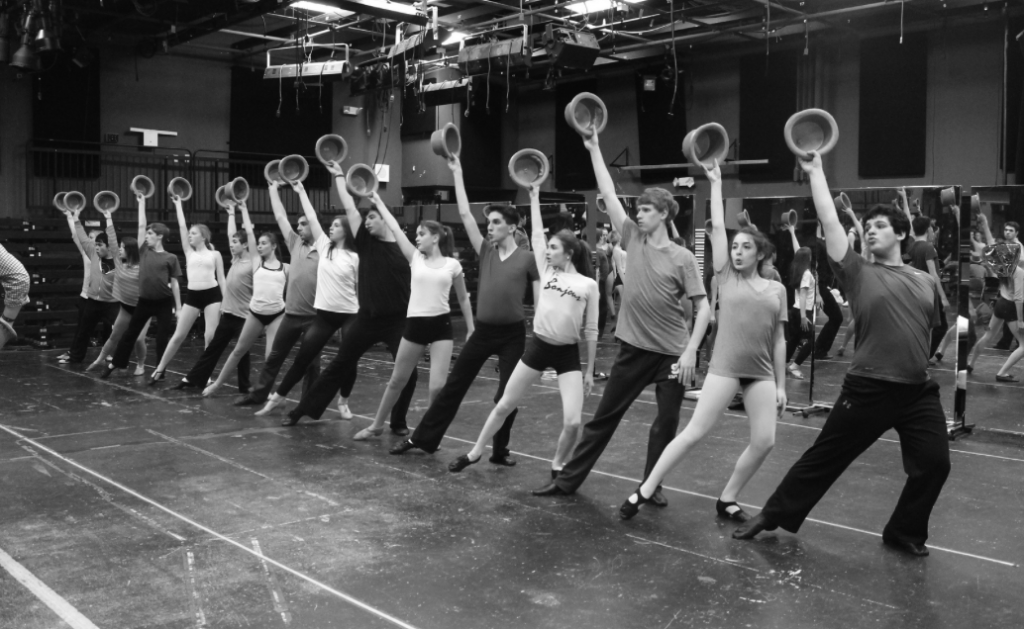 It seems like just yesterday that this year’s Senior Players walked through the Black Box doors and into the “four hallway.” Four years later, many of them are preparing to take their last bow on the Staples stage.

“Staples Players is the promised land of high school—the land of endless opportunity if you will,” said Alexandra Rappaport ’13. But even she admited that everything that could go wrong did go wrong in Players while the class of 2013 was at Staples.

Talk about drama within the drama. Since 2009, this Players class has been making history, beginning with its first main-stage musical, “Guys and Dolls”, when many cast members were plagued with the “Swine ‘09” epidemic.

“Everyone wore facemasks through all of Hell Week,” Maddy Seidman ’13 said. “I was told to learn two parts the day before opening.” A brother and sister were double cast as Sarah Brown and Sky Masterson, the two leading roles who were love interests so they couldn’t both go on together. Luckily, both Sarahs and both Skys made it through the run in good health, but it was a close call, especially considering that another leading actor had come down with swine and another had a broken foot.

As if that wasn’t enough, on opening night, the directors, David Roth and Kerry Long, were absent, as Long was giving birth to their child, Lucy.

“I remember having theater first period Friday morning, opening night,” August Laska ’13 said. “When a substitute teacher walked in, we knew what it meant.”

For the cast and crew, the rest of that day was a blur, filled with worries about how the night would play out. Caley Beretta ’11, the assistant director, took over, and the show went on without a hitch.

Players also had its fair share of weather-related issues over the past four years, from the March storm of 2010 during “Little Shop of Horrors,” to Hurricane Sandy this year during the fall main-stage “Oklahoma!”. During “Little Shop”, rehearsals were held at SaugatuckElementary School, and on opening night the lighting board’s memory was wiped and the entire lighting plot was lost, so the show had to be lit live. Because of power outages during “Oklahoma!”, rehearsals took up temporary residence at the Conservative Synagogue (one of the only powered locations in town) and were run by assistant directors.

“One example that didn’t really get much attention was the 2011 summer show “Jesus Christ Superstar” when the air conditioning broke in the auditorium, and the intense heat led to cancellations of rehearsals during tech week,” Jent said. But of course, all of these shows opened on time.

Np matter the Weather, sickness, or even injury, Players  pulled through every time. On the final day of tech week for “West Side Story”, there was a mishap with stage combat during one of the huge fight scenes that gave Jent a concussion and knocked him out for all of the last week of rehearsals, until he returned right before opening.

Ryan Shea ’13 had a similar experience.

“I had a tendon in my right foot that was partially torn during rehearsals for A Chorus Line this year,” he said. “I wasn’t able to dance for two weeks, and it was very painful, but, because of the support of the cast and crew, I was able to go on and have a great experience performing.”

Craziness aside, there have been many wonderful moments and opportunities for this class. Over the years, Players has had the chance to work with many professionals. For instance, Players worked with Rupert Holmes, the composer of the music for the show “Curtains,” performed by Players in the fall of 2010, and this year they worked with Baayork Lee, who played the original Connie Wong in “A Chorus Line” on Broadway. The icing on the cake was after this March’s production of “A Chorus Line,” Terre Blair, the widow of the show’s composer Marvin Hamlisch, asked the cast to perform at Hamlisch’s birthday celebration in New York City on June 3rd.

“Theatre has opened doors for me in English, history, and psychology,” Will Smith ’13 said. “I joined Players to release myself from the stressful way of society. Players has been the place I could relax in while practicing my acting skills in a non-judgmental environment.”

Seniors said that, regardless of the crazy moments, the organization has been and will continue to be a huge influence on their lives.

“It has been an irreplaceable four years in Staples Players. Four years that has had a whole lot of challenges but a whole lot of heart,” Jent said. “I’ll never forget it.”

“It’s safe to say that we as the class of 2013 have probably been through some of the most testing times in Players’ history, but it’s also safe to say that we’re one of the most promising classes to pass through,” she said. “It was the difficult, unlucky times that really made us what we are.  If you asked any of the seniors if we’d change anything, I think you’d get the same answer from us all. Not for the world.”