Painting the Walls of Staples 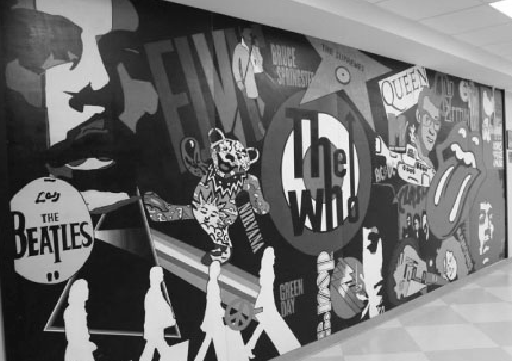 In the hallways of StaplesHigh School, students rush by as if they are on the busy streets of New   York City. Students speedwalk from the third floor math department to the first floor gym locker room, and vice versa, trying to make it to class on time. But if students travel down the media hallway, it is a time to slow down and stare in awe at the walls.

There, sprawled across the wall, is an impressive painting that looks like an exploded beige brick wall revealing a classroom inside.  The painted depiction of a long metal table, some chairs, curtains, microphones, and detailed posters looks very similar to the real media room.

This wall painting is a mural, and, thanks to the mural painting class, students at Staples will be seeing a lot more like it.

According to Tracy Wright, the teacher of the Mural Painting class, the images for the murals aren’t decided on solely by the mural class. The departments also have a say as to what image is created.

“The mural is based on the request of the ‘client,’ which, in this case, means a school department or administrator,” Wright explained. “The client presents their ideas and the mural painting students design it from there.”

Usually departments in the school request the murals. Then the students and the ‘client’ work together, coming up with a theme and design for the mural. After the design is made and agreed upon, the students get to painting. Every student in the class participates in bringing the design to life. Once completed, the final mural is placed on a wall near the department that requested it. The whole process takes about a semester.

The first mural to go up was the one found in the Language Hallway. The most recent mural is located by the media room. They are all amazing and so it is no surprise that they are in high demand; each school department wishes to have a mural of its own displayed proudly in the hallway.

However, meeting the high demand is difficult.  “We cannot accommodate the number of requests we have as quickly as we would like,” Wright stated. “Mural painting is a process that takes some time.”

But the murals are worth waiting for. Unlike the halls in other schools, halls at Staples are filled with color and brilliant representations of the different classes taught.

Wright is pleased that the murals have had a positive effect on the school.  “It brings happiness, color, and a sense of community,” Wright said.

“Plus, I think they look really cool,” Nicole Williams ’15 added.