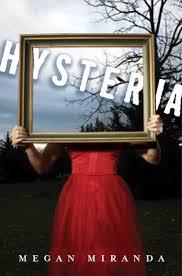 TO READ AN INTERVIEW WITH THE AUTHOR OF HYSTERIA, CLICK HERE

If you like murder, mystery, or psychology with a dash of romance you’ll love Hysteria by Megan Miranda.

I would normally not choose a book dealing with a death, but a book about a girl, Mallory, murdering her boyfriend? That captures my attention.

The book focuses mainly on Mallory’s guilt over murdering her boyfriend, even though it was in self-defense. This plot line could have become tedious if the author hadn’t written in touches of real psychological symptoms of hysteria in Mallory’s guilt. But the fact that she’s kind of going insane and it is real psychological information really adds weight and intrigue to the book.

Hysteria begins a few months after the killing, and Mallory is still surrounded by people who are scared of her, who hate her, who want to hurt her. She’s soon sent off to boarding school to get away from the attacks, but from her view her parents, the people she expects to be there for her, getting rid of their psychopathic daughter.

The parents’ behavior really doesn’t add up even at the end of the book. They are afraid of her, but they claim their actions were for her protection and that all along they loved and trusted her. But locking their bedroom door and hiding the kitchen knives…? That’s not for her, that’s because they’re scared for their lives.

The only people who seem to support Mallory are her best friend Corrine, the most and Reid, a boy she had met several times over the years, but now becomes friends, and more, as the story progresses.

Now, I love a good romance, but it just does not make sense to me how she would want even a hint of a romantic relationship when she is barely coping with her severe guilt over killing her last love interest. Doesn’t make sense, but I did love Reid. Even if his affections seemed a bit misplaced.

The only other people she deals with are the actual insane ones in this story. At the boarding school, four students, all connected in odd ways mess with Mallory and her guilt. It is creepy. And I admit, I got a little scared during the book.

It was an extremely eerie book with sinister characters. And because they’re just teens you don’t expect them to be scary. But Mallory’s surrounded by sociopaths.

I really felt like I was with Mallory the entire story. I was in her head, I felt her pain and confusion. It was really well done, and for a girl who doesn’t usually like the darker story I was pulled in. I became very invested in what happened, and I’ve got to say, I was not disappointed.