Vinyl is Back: Records Rise in Popularity, Staples Students On Board 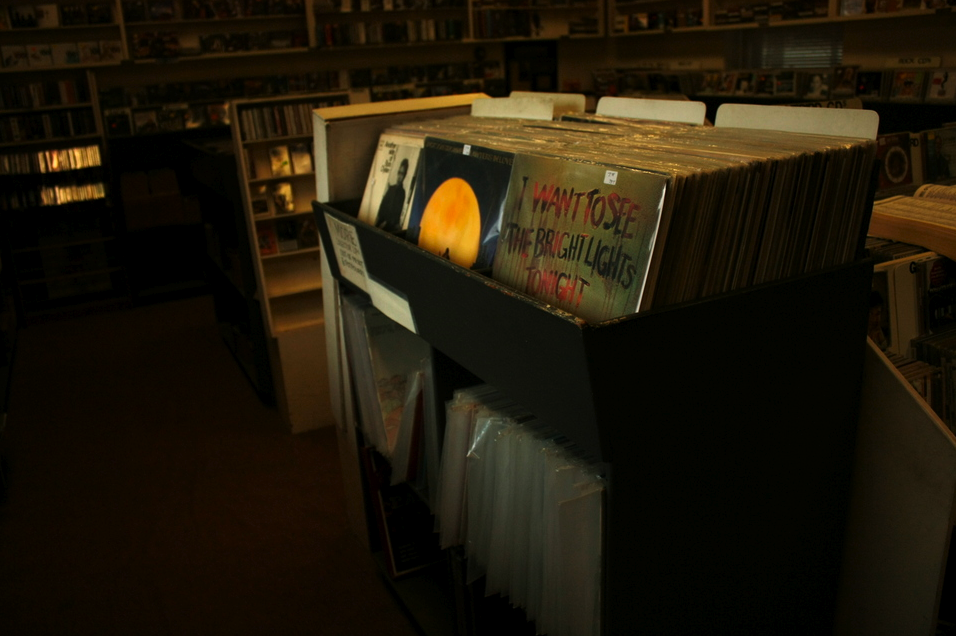 A display of the many records Sally’s Place offers to audiophiles. Located in downtown Westport, Sally’s Place caters to a wide variety of different genres of music. Sales for vinyl records have increased in recent years. | Photo By Melanie Mignucci '12

Vinyl records, the dinosaur of the music industry, may instead be the next big thing—again.

Records have enjoyed a substantial jump in sales in recent years. According to the Recording Industry Association of America (RIAA), 2.9 million units were shipped in 2008.

Official statistics from the RIAA show that the share of the market dominated by vinyl LPs jumped from .7 percent to 1 percent in 2008, while CD sales suffered a decrease of 4.8 percent.

This data suggests that more people are slowly embracing the older but higher quality technology.

Records have been around since the 1920s, but were made obsolete in the late 1980s by the rise of digital media—cheaper, smaller and faster, but of much lesser quality.

Even with the pops and crackles, the imperfections of vinyl records make them sound perfect to the human ear. For this reason, the high sound quality of records makes them highly desirable among audiophiles.

Vinyl “feels more valuable,” according to everyday listener Grace McGovern ’11. “You don’t sit down and listen to one song on a record, but an entire record. It’s an experience.”

The experience of listening to vinyl has an anachronistic appeal, especially for younger generations obsessed with what McGovern calls “vintage technology.”

A Dec. 2008 article in “New York Magazine” described the experience of record shopping and listening as “the thrill of discovery,” another appeal for would–be record collectors.

Mikey Holmes ’10 was originally attracted to records because of “the ability to go to record stores and find obscure, independently released music that was most likely heard by a fairly small audience.”

Like a cult film, vinyl’s rise in popularity can be attributed to the relatively small audience and niche factor. McGovern said that records attract independent music supporters because “more independent bands have been producing on vinyl.”

Indie bands may be producing their own records, but even mainstream hits can be found on vinyl. The novelty and the thrill of discovery is not all that is propelling its success.

Elizabeth Rubel ’10 has been listening to vinyl for her entire life. She attributed this to her father’s love of vinyl.

“My father always had a turntable in our stereo system,” Rubel said. “I got into classic rock from listening to his records. A few years back I started collecting myself.”

Rubel’s collection includes albums like Elvis Costello and The Smiths, or “newer albums, like the Shins or Phoenix.” She estimates her collection of records to be around 150, with more boxes of them in the attic.

Records are easily available from boxes in the attic, online, thrift stores, and even downtown Westport.

Sally’s Place, located just beyond the far end of Main Street, has been in business for “hundreds of years,” in owner Sally White’s words.

When asked to identify the reason behind the current trend in vinyl sales, White had a singular opinion as to what allows vinyl to make a comeback.

“The sound. Absolutely the sound,” White said. “Everyone thinks digital is going to make it

big but the analog sound is what the kids want.”

Clearly, the convenience of digital music does not make up for the high sound quality and the whole experience of listening to vinyl.

The data and the testimonies of listeners point towards the future; people are looking at vinyl records as a serious music source, and not a hip throwback. Consumers in the future will be making more purchases based upon quality and lasting value, as opposed to novelty, if this trend continues.

Vinyl’s rise in popularity shows that consumers are slowly rediscovering the benefits of better quality music and experiential listening.

Best Album To Get On Vinyl

Let’s be honest—there are really only two reasons you buy vinyl. You want to look cool, or you like the sound better. Serge Gainsbourg’s classic LP Histoire de Melody Nelson will fulfill both of those goals; it’s smooth, it’s funky, it’s menacing, and it’s got the finest bass sound ever heard in France.

Great Places to Get Vinyl

But if that’s what you groove to, this place is your paradise, with a wide selection of LPs featuring everything from Brooklyn sonic adventurers Black Dice to New Zealand improvisational group the Dead C.

If you’re not into noise music- not noise pop, not noisy rock and roll, but straight up noise music- you’ll probably want to stay away from this place, where the clerk blasts Japanese ambient noise and modified guitars hang on the walls. – Again, convenient for Stapleites and cheaper than anything else. And if you can stand sifting through a million Olivia Newton-John records, you’ll reap great rewards; I’ve picked up some great Sly & the Family Stone records here, as well as a few novelty LPs that were too great to pass up- Mickey Mouse Disco, anyone? – Convenient for Stapleites, modestly priced, and has a varied and surprising selection. I’ve gotten everything from old Who LPs to bizarre funk soundtracks there.