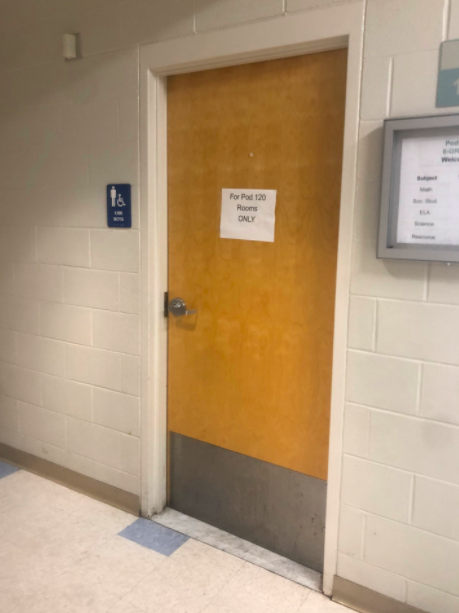 The effects of a viral TikTok trend can be felt all across the state, even in our own town at Bedford Middle School, where bathrooms such as these were vandalized and stolen from.

A recent TikTok trend that has involved theft, destruction of property and vandalism at schools has spread to Westport, specifically, Bedford Middle School (BMS), resulting in restrictions on student freedom in the building. Boys’ bathrooms that don’t have hallway-level surveillance are currently locked.

“[The] national trend of theft and vandalism in schools popularized on the social media platform TikTok, called ‘licks’ or ‘devious licks,’ has manifested at Bedford Middle School,” BMS Principal Adam Rosen wrote in an email to parents. “This year already, BMS had a national flag stolen from the cafeteria; multiple instances of hand soap and towel dispensers torn off of walls, damaged and stolen; hand soap dispenser bags exploded covering bathroom floors; a gallon jug of common-use hand sanitizer was stolen and then destroyed in our boys locker room; urinal screen shoved into sink drain causing a flood; safety equipment taken and moved throughout the school.”

To date, there have been near 100,000 videos showing students vandalizing schools in pursuit of TikTok fame, to the point where Connecticut Senator Richard Blumenthal and the executive director of the Connecticut Association of Public School Superintendents, Fran Rabinowitz, held a press conference about the trend and its effects on schools state-wide.

“We have seen first-hand, in Connecticut and around the country, the absolutely destructive effects of these viral video challenges,” Blumenthal said during a press conference in Hartford earlier today. “Theft and vandalism are glorified.”

Meanwhile on a local scale, Rosen, along with District Superintendent Thomas Scarice, believes that the temporary preventative actions are “necessary and effective,” in blocking further escalation of the trend and takes the events that have transpired seriously, even if it is not currently believed that the trend will continue at BMS.

“I have confidence that Dr. Rosen worked with his team to develop an approach that will appropriately address the vandalism so that this costly behavior will end,” Scarice said. “Pranks are not new to schools. In fact, class pranks have been memorialized at the college and high school level in movies and stories passed on through generations. However, this trend is not what I have experienced as a prank. It is vandalism and most disappointing.”