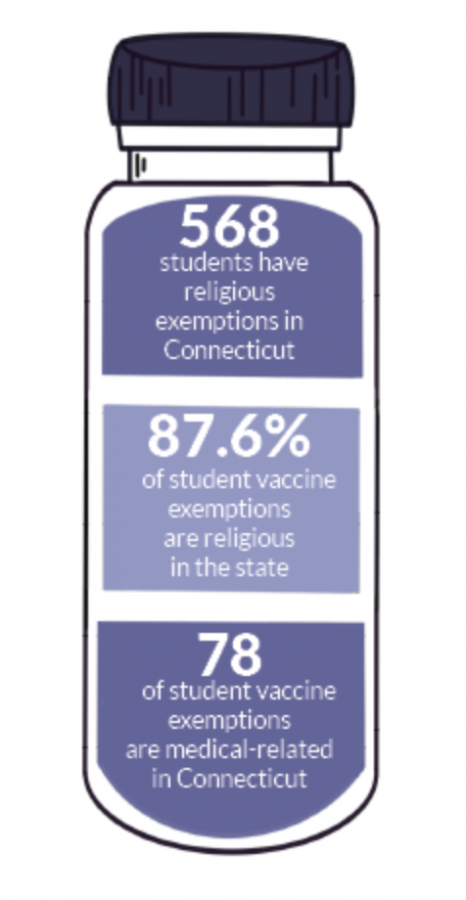 Due to the Connecticut State Senate’s bill, students who were previously exempted from the vaccine for religious reasons are no longer excused.

The Connecticut State Senate has passed a bill that will no longer allow religious exemptions from children’s vaccination requirements for schools, colleges and other educational facilities.

One such opponent is Republican state Senator, Tony Hwang, who wrote an OP-ED on the hearing’s dissatisfying voting process.

“There are many who opposed this bill and believed in a different approach and they were neither heard nor respected as the committee considered this bill,” Hwang said. “The public hearing was closed at the 24 hour mark and nearly 1,800 people were denied the opportunity to personally testify.”

Hwang supported the opinions of thousands of opposers of the bill who stood outside the state capitol building during the Senate hearing. Some chanted cries such as “Defend Religious Liberty” and “Coercion is not Consent,” according to an NBC Connecticut article.

The bill affects both private and public schools of Connecticut, higher education, in addition to day care and pre-kindergarten programs. The ban will go into effect starting on Sep. 1 of the 2022-2023 school year. The previous bill with exceptions will remain until then, and the medical exception has not been affected by this vote.

Today in Connecticut, you cannot disagree with the status-quo on these public policy issues dictated by one-party Democratic rule and potentially risk being demonized and scurrilously defamed.”

Suzanne Levasseur, the Supervisor of Health Services for Westport Public Schools, noted that although the ban takes away the chance for religious exemptions, for now, many students will still be able to use a religious exemption if they already previously obtained one.

Senator Hwang also expressed dismay at how opponents of the bill are being branded as people who are anti-vaccine, stating that social media is contributing to the problem.

“The mischaracterization and social media proliferation attacks on anyone who oppose this bill, rampantly identifying them as dangerous and callous ‘anti vaxxers’ — this social smearing has already hit cyberspace,” Hwang said. “Today in Connecticut, you cannot disagree with the status-quo on these public policy issues dictated by one-party Democratic rule and potentially risk being demonized and scurrilously defamed.”

Chloe Ashton ’21, who is a member of The Church of Jesus Christ of Latter-day Saints, defended the new ban, saying that to her knowledge, most religions don’t prohibit someone from getting a vaccine.

“I think people are abusing their rights to religion and using it as an excuse when it’s not actually their beliefs,” Ashton said. “I think the cases in which it does actually harm people are very rare.”

However, many people such as Senator Hwang, who is also the co-ranking leader on the Public Health Committee, feel that the bill will affect thousands and is not fair to the citizens who did not have a chance to testify.

“Why pass this mandate […] ignoring the voices of the nearly 5,000 people who protested outside the capitol,” Hwang said, “other than exerting the overriding power of government control over people’s personal body rights.”

Nell-Ayn Lynch, a history and economics teacher, notes that the bill is one that brings to light the discussion of government power and citizens’ view on how wide that can and should be.

“I think people also fear that if […] it passes through and becomes, you know, actually a law, what else are they going to change?” Lynch said. “What other freedoms can they take away?”

The vote, according to Hwang, was partially split between political parties, but he feels this is still a matter of liberty, not of political sides.

“While the rejecting vote in the Senate was made along mostly party lines, with [two] Democratic Senators joining all Republican Senators,” Hwang said, “I maintain that this particular issue is neither Republican or Democrat.”

Levasseur pointed out that vaccines are necessary to protect resurgences of diseases that can be deadly to both children and adults, and wide-vaccination is the sole way to keep these fatal illnesses from further transmission.

“I think that vaccination, especially of children, is essential in keeping children safe from deadly diseases such as polio, diphtheria and tetanus,” Levasseur said. “When the greater number of people are vaccinated, it protects not only themselves but the people around them.”

With the vote on liberty versus religion put to the test, some in town feel that this is the only way to keep people safe, even if it goes against something they believe in.

“Although [this separation] is important, I think that when it comes to protecting the welfare of everyone, some sacrifices need to be made,” Ashton said. “I think it’s more important to protect lives than protect religion at this moment.”