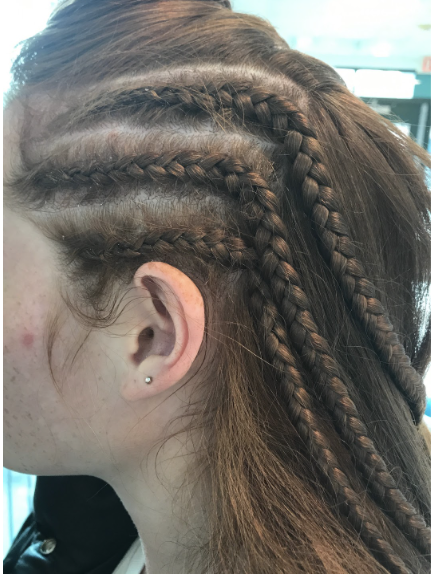 Riley Chluspa ’22, a member of field hockey team, got her cornrows put in with the team and will wear them until the team loses a game or until they reach the end of the postseason.

This year, the field hockey team got cornrows as a way to raise team morale before going into the postseason.  While they were put in with the intent of raising spirit for the team and are a part of the yearly tradition, the cornrows are culturally offensive.

The hair of African Americans is traditionally curlier with more kinks, making it harder to maintain than the hair of someone who is of European descent.  Cornrows were created in Africa or the Carribean, by slaves, so they would be able to keep their hair out of their face while they worked. Never was the hairstyle done as a fashion statement, but as something so the slaves were able to work without distraction.

Now the hairstyle has been turned into a fashion statement by white women, inspired by Kendall Jenner, who made it seem as though she came up with a fresh, new style.  The false idea that white women created cornrows is not only offensive to black culture, but oppresses them.

This takes away from the struggles that black women have gone through because of the stigma around their hair.  In a study done by Perception Institute, a black woman is nearly twice as likely to feel pressure to straighten her hair than a white woman.

While the field hockey team did not put the cornrows in with ill-intent, by wearing them, they are essentially supporting hundreds of years of systematic racism.  The cornrows ignore the trials that the black community has gone through and then it makes it seem as though white people were the creators of a new “fashionable” hair statements.

Additionally, the cornrow hairstyle was not adapted through cultural exchange, which is when a culture has an appreciation of an aspect from another culture.  Rather, the field hockey did it to show pride in their own team, not the culture of African-Americans. They brand the cornrows as their own, not as the cultural property of African-Americans.

I do see the importance of teams having spirit; however, there are other ways that the team would be able to showcase it.  The girls’ swim and dive team bleached a streak of their hair blue and the girls’ volleyball team sprayed a strand of hair blue earlier in their season.  Both are styles that are not offensive, but showcase that the girls are apart of a team.

Encouraging teams to have spirit is crucial to the success of the team, but it must be done in an appropriate way, or else it harms our schools environment.