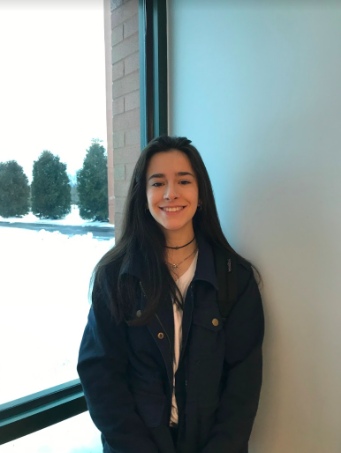 Rodriguez eagerly speaks about her poem and reflects on her experience with the contest. She is excited to share her story and be a voice for her fellow Venezuelans.

A handout from her freshman English teacher about a writing contest may have been the catalyst Miranda Rodriguez ’21 needed to finally make her voice heard.

In the spring of 2018, Rodriguez entered the national Fighting Words Poetry Contest. She saw it is as a unique opportunity to share her and her family’s story and inform her community about the current Venezuelan crisis. Rodriguez earned third place, a Junior Pulitzer Prize.

“It felt great to know that people care about Venezuela,” Rodriguez said.“I was trying to advocate really hard for it for years and it was a really big step for me to earn an award for it and know that I could keep going and people would listen.”

When the contest was introduced to her, she automatically knew it was her chance to speak up. Rodriguez thought that maybe people would finally pay attention if instead of speaking, she wrote how she felt.

For as long as she could remember, Rodriguez’s family had been preoccupied with the ongoing crisis in her parents’ home country of Venezuela. The country has faced an economic crisis for 20 years with rampant inflation rates. A large majority of Venezuelans live in poverty and experiencing violent crime is commonplace.

Her friend of a long time, Camryn Zukowski ’21 knows how important making people aware of the situation in Venezuela is to Rodriguez. And she is proud of her piece.

“I was moved by [her poem],” Zukowski said. “I know she worked really hard on it.”

Rodriguez has never been able to find an outlet to talk about the Venezuelan crisis. Now, she has found her voice, and this prize will propel her to spark the necessary discussion.

“I just want everyone to know about Venezuela,” Rodriguez said. “I’m not going to stop talking about it.”